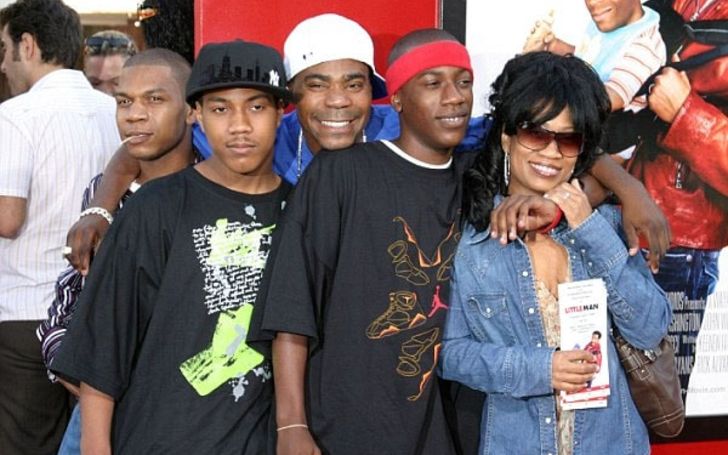 Who is Gitrid Morgan? Well, Tracy Morgan fans might already know the answer to that question. He is the eldest son of the renowned actor and comedian Tracy. His celebrity dad welcomed him with his first wife, Sabina Morgan. Talking about his father, Tracy is well-known for his work on Saturday Night Live. Let’s learn more about his parents, siblings, and Gitrid himself in this article.

Gitrid Morgan came to the spotlight as a celebrity child; he’s the eldest son of Tracy Morgan and Sabina Morgan. The former duo welcomed him back in 1986, as per Celeb Pie.

After giving birth to Gitrid, his parents expanded their family with two more sons. Thus, he got two biological brothers: Malcolm Morgan and Tracy Morgan Jr., as siblings.

Besides his two brothers, Gitrid also has a half-sister named Maven Sonae Morgan. She was born in New York on July 2, 2013.

If you’re in this line, then you guys already got the idea that Gitrid Morgan’s dad married twice. Yes, he tied the knot two times in his life; unfortunately, both of his marriage ended with a divorce.

Gitrid’s father, Tracy, first walked down the aisle with his ex-spouse, Sabina Morgan. The former duo first met during their high school days. After knowing one another for some time, they shared their vows in 1987.

Together Saturday Night Live star and Sabina gave birth to three children, one being Gitrid. They were happy with one another alongside their kids. However, as time passed, things fell apart, and the former pair decided to end their marriage.

Following their decision to divorce, Tracy and Sabin legally separated in 2009. Two years after the divorce, in September 2011, Gitrid’s dad announced he was engaged to model Megan Wollover. Indeed, he gave a second try to marriage.

After Tracy shared that news, he and Megan stayed engaged for a while, and on August 23, 2015, the love birds got married. Prior to that, they also welcomed their first child together. They gave birth to a baby girl Maven in New York.

Sadly, Tracy’s second marriage will share the same fate as his first one. The ex-couple recently filed for divorce in July 2020.

Is Gitrid Married? Who is His Wife, Or is He Still Single?

Despite being a celebrity kid surrounded by paparazzi all the time, Gitrid Morgan somehow managed to keep his private life away from the media. Further, he isn’t active on social media. Yes, no Facebook, Instagram, Twitter, or any other social platform. Therefore, his relationship status is unknown to this day.

There are no records of his dating history, because of which it’s hard to comment anything on his love life. Gitrid might be married, living a beautiful life followed by his gorgeous wife and children. If not that, he might be dating someone special, and in the worst-case scenario, he might be single as of now.

Speaking of Gitrid Morgan’s finances, there’s no official document to vouch for his earnings and income. Due to his secretive nature media got no idea about his career path, and it even blocks reliable sites to estimate his net worth.

Nevertheless, Gitrid does enjoy his father’s greens. According to Celebrity Net Worth, his dad, Tracy, holds an outstanding net worth of $70 million.