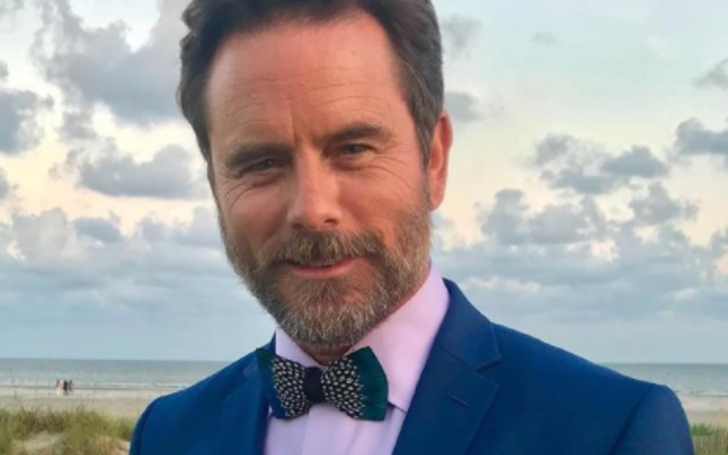 Charles Esten, also professionally known as Chip Esten, is an American actor, musician, and comedian. He is popular for his character as country singer Deacon Claybourne on the hit ABC/CMT drama Nashville which notably kickstarted his musical career.

Charles Esten is a married man. He has been happily married to his high school sweetheart Patty Hanson since 2 November 1991 dating four years. The wedding ceremony was held at All Saints Episcopal Church, Winter Park, Florida, U.S.

Esten and Hanson met back when they were both studied at the College of William & Mary. At that time, Patty had come all the way from Italy, a member of a military family, and initially wanted to attend Duke. Fortunately, she wasn’t accepted in time and ended up on campus with Esten.

In the beginning there we no sparks between the two as Patty was already linked to another guy and Esten was busy performing around town with his band N’est Pas. But sophomore year, after a breakup, Patty watched Ne’s Pas live. Charles, most notably, sang “Romeo and Juliet by Dire Straits directly to her in the audience.

In the lifetime voyage, Charles Esten and Patty Hanson became parents to three beautiful children namely Taylor Puskar, Chase Puskar, and Addie Puskar. Charles and Patty are actively involved with the Leukemia & Lymphoma Society since Addie was diagnosed with acute lymphoblastic leukemia while she was just two and a half years old.

How Much Is Charles Esten’s Net Worth?

Charles Esten has an estimated net worth of $4 million as of 2020. He receives a salary of at least $51,826 per year and $24.92 per hour which is the basic salary of a songwriter in the U.S. Needless to say, Charle’s earns big chunks from his career as a singer-songwriter and actor.

In 1983, Charles took part in at least 5 episodes of Sale of the Century. He won over $20,000 in cash and prizes. Two years later, the actor again appeared on Scrabble in 1984. Esten stepped into the Hollywood industry performing as an actor on the television series The Crew from 1995 to 1996. One of his breakthrough roles came featuring Deacon on the TV series Nashville in 2012.

His TV credits include On The Television, The brian BenBen Show, The Office, ER, Big Love, Enlightened, and Jessie. Besides, the 55-year-old made an appearance on the comedy TV series Whose Line Is It Anyway and Drew Carey’s Improv-A-Ganza.

In the same vein, the star had some popular singles from TV series Nashville including Connie Britton, Clare Bowen, and Hayden Panettiere. He starred in few episodes of Star Trek: The Next Generation, Diagnosis: Murder, JAG, Married…with Children, The Drew Carey Show and many others.

Charles Esten was born as Charles Esten Puskar III on September 9, 1965, in Pittsburgh, Pennsylvania, United States. He stands at a height of 6 feet (1.85m) and weighs around 75 kg. Son of Cynthia Esten, Charles has a sister named Cathy Puskar. Speaking of hobbies, Esten had a keen interest in farming, acting and music as a child. For instance, Charles played Deacon Claybourne on the ABC notorious show Nashville at age 8. Later on, Esten realized he wants to pursue a career as a singer-songwriter.

Keep coming back to Featuredbiography.com for more biography.