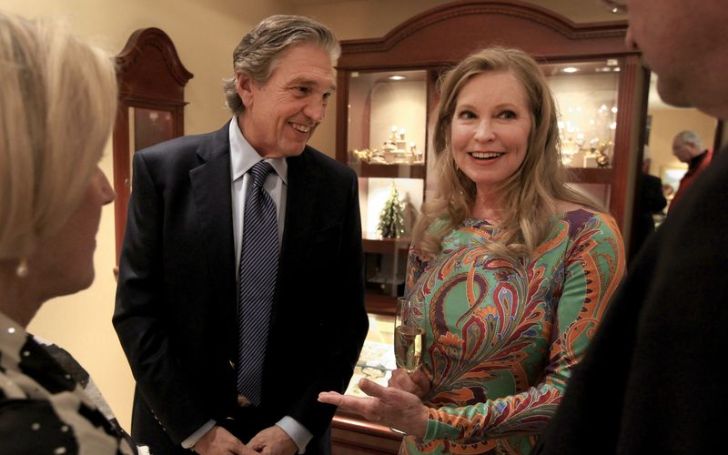 Albert DePrisco garnered his success in the jewelry line. He’s a well-known jeweler who owned ‘AM DePrisco Wellesly.’ Although he’s quite popular in his business field, it isn’t the thing that made him famous in the mass. It’s actually his marriage that earned him limelight. Indeed, without a doubt, he tied the knot with a celebrity. His wife is an American director, actress, writer, and professional dancer. Because of his spouse, he attracted lots of attention, and many want to learn about him, which brought us to this article today.

Who is Albert DePrisco’s Wife?

Those who wonder with whom did Albert DePrisco tied his knot, then let us tell you it’s the renowned actress, writer, choreographer, and director, Lisa Niemi Swayze. Indeed, he is married to Steel Dawn cast.

The lovely couple first met through mutual friends during a barbecue at Lisa’s New Mexico ranch. Gradually, they watered their relationship and shared their engagement rings.

Albert and Lisa announced their engagement on December 28, 2013. Following that news, they walked down the aisle on May 25, 2014. They shared their vows before their family and close ones.

As mentioned by Aussie Celebs, the bride and groom danced at their reception, choreographed by Albert’s sister Deirdre, a professional ballroom dancer. Currently, the love birds are enjoying their time together.

Albert DePrisco’s wife, Lisa, was previously married to someone else. She was with her late husband, Patrick Swayze.

Albert’s better-half first met Patrick at the age of 14 at the Houston Ballet Dance Company. Patrick was the owner and director’s son. After knowing one another for some time, the duo eventually began dating.

With a better understanding between Niemi and Swayze, the former pair tied the knot on June 12, 1975. They remained married until Swayze’s death from pancreatic cancer on September 14, 2009.

Speaking of Lisa’s children with her late beau, they had no children. But, sadly, Albert’s spouse did suffer one miscarriage when she was with her first husband.

Because Albert DePrisco earned his fame from his marital relationship, there isn’t much information accessible when things become personal. All media has are details on his career and marriage.

Regardless of all, sources claim Albert was born to his father, Francis DePrisco, and mother, Marie DePrisco, in the United States. Further, he has a sister named Donna E. DePrisco in his family.

Before sharing anything on Albert DePrisco’s finances, it will be better to shed some light on his career background. It’s estimated that he was previously in the movie industry. Precisely speaking, he was mostly acclaimed in the movie era of’ 70s-’80s.

After some years of work in Hollywood, Albert changed his profession. He then entered in the jewelry business. Actually, reliable sites claim his jewelry business started from the family blood.

Coming to Albert’s fortune, he’s a wealthy man and lives a lavish lifestyle. However, his actual net worth is unknown. Nevertheless, speculation runs around the internet that he has a net worth of $8 million as of 2020, which seems legit for someone who is into jewelry line for years.

That’s all for now; follow Featured Biography for more of these articles.