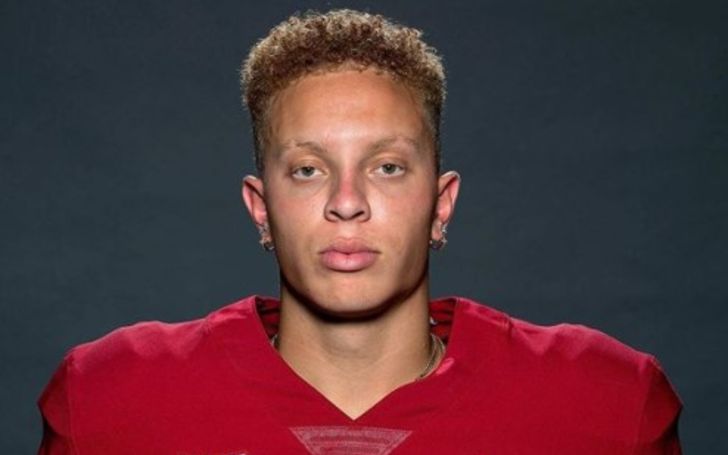 Who is Spencer Rattler? He is an upcoming football star. Indeed he is. Precisely speaking, he is an American football dual-threat quarterback for the Oklahoma Sooners. His impressive work in the field earned him tons of attention at an early age. Besides his fantastic gameplay, he is renowned for his work in the Netflix sports documentary series called QB1: Beyond the Lights. Let’s learn more about him on today’s article.

There isn’t any information available regarding Spencer Rattler’s fortune. However, going through his social pages, we can see he lives a lavish lifestyle, enjoying every moment of his life.

Speaking about the young athlete’s net worth, he has an estimated net worth of $455 thousand as of 2020. Yes, a six-figure-net worth in his early twenties, and all the credit goes to his budding career as a footballer.

Spencer Rattler Starred in the Netflix Documentary Series, QB1: Beyond the Lights

The 20-years-old Spencer Rattler is just starting and seeing his past records many placed a high hope from him. While earning the supports of many and paving his way to become one of the best in the football world; he also starred in a Peter Berg directed Netflix sports documentary series called QB1: Beyond the Lights.

Rattler showed up in ten episodes of Netflix’s QB1. However, later on, he was suspended and ineligible to play for a certain number of seasons for violating the district code of conduct.

Spencer Rattler graduated from Pinnacle High School in Phoenix, Arizona, in 2019. During his time there, he broke the Arizona high school passing record. He threw 11,083 yards in his four years with 116 passing TDs and rushed for 1,040 yards with 14 rushing TDs.

Click To Know:  The UFC Star Tyron Woodley Net Worth and Married Life

In addition to an exceptional record, Rattler even became MVP of the Elite 11 at The Opening in Texas. Subsequently, he joined the University of Oklahoma as a student-athlete. There he began to play for Oklahoma Sooners.

According to News Break, Rattler was a five-star recruit and the No. 1 Pro-Style quarterback in the 2019 recruiting class.

As of 2020, Rattler is playing with his Oklahoma Sooners team, improving his moves and gameplay as a running quarterback.

The Oklahoma Sooner’s Rattler is Dating His High School Girlfriend

Talking about Rattler’s love-life, the National QB of the Player is dating Yazmina Gonzalez. The two love-birds went to the same high school. Further, the young couple also went to prom together. How do we know that? Well, Rattler’s twitter post makes it all clear.

Focusing on Rattler’s girlfriend, she’s also in her early twenties. Like him, she’s also into sports. Precisely, she prefers to play volleyball. During her high school, the beauty stayed active as the Pinnacle Volleyball Player.

Is Spencer Rattler starting at Oklahoma?

Where did Spencer Rattler commit to?

Spencer Rattler is commit to Oklahoma Sooner, as of 2020.