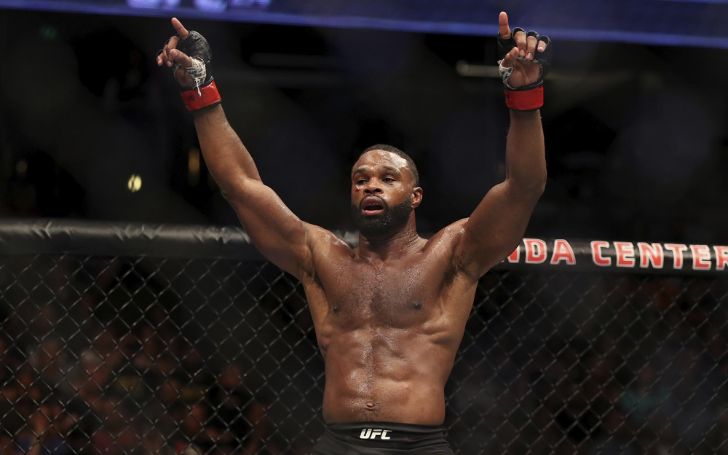 The former UFC Welterweight Champion Tyron Woodley was born on April 7, 1982. He hails from Ferguson, Missouri. The American professional mixed martial artist and broadcast analyst are quite famous in the UFC world. Except for his career success, the 38-years-old fighter has been in the news headline for other things too. In order to know what it is and learn more about his professional and personal life, stay tuned till the end.

According to Project Hatch, the UFC star Tyron Woodley has a massive net worth of $4.5 million, as of 2020. He managed to garner a massive fortune from his successful career as a fighter.

Besides fighting in the ring, Tyron uses his spare time to work on different cinematic projects. Until today he portrayed a couple of fantastic roles in the movie like Straight Outta Compton, Kick Boxer Vengeance, and Sultan.

Tyron is active in the music industry. He’s a rapper, and according to sources, he recently dropped his latest rap single named Dead Ass. With that being said, we think it’s clear that he has multiple income sources; thus, we think it’s legit for him to hold a millionaire tagline.

As noted by CBS Sports, Tyron Woodley lost his recent match with his opponent Colby Covington. Sadly, yes, he lost that match.

Losing wasn’t the only thing he suffered in that fight; he was severely injured too. In that UFC Fight Night main event, Tyron ended up with a rib injury in the fifth round before losing the match. Because of that wound, he was out, awarding Colby a TKO victory.

Like many celebrities, Tyron Woodley chose to keep his private matters away from the media door. Due to this reason, much isn’t available on his dating history. However, the world comes to know that he dated his wife, Averi Woodley, a fitness coach.

The beautiful couple met during their high school days. Both attended McCluer High School from where they graduated in 2000. Similarly, they also ended up in the same university, Southern Illinois University Edwardsville.

During their time in the university, it’s believed they started dating. Gradually as their understanding grew, they tied the knot. The beautiful pair even welcomed four children in their life. They gave birth to three sons, Dylan, Darron, and Tyron Jr, and a daughter, Gabby.

Although Tyron and Averi were doing fine in their life together, things turned upside down for Averi when news about Tyron dating someone else picked up. Indeed, the 38-years-old fighter cheated. His photo was clicked by some paparazzi, where we can clearly see him kissing a lady, absolutely not his wife.

What is Tyron Woodley worth?

Who has beaten Tyron Woodley?