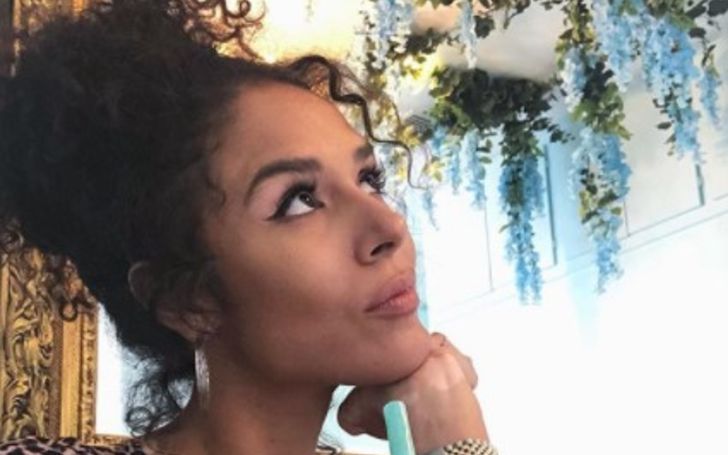 Brittany Bell is an American model and beauty pageant titleholder, crowned Miss Guan 2014. After her win, she even represented Guam at Miss Universe 2014. Before that, she also earned the title of Miss Arizona USA 2010 and subsequently, represented Arizona in Miss USA 2010. Further, she was a dancer for the Phoenix Suns of the NBA for around three seasons. Besides her work, she grabbed tons of attention from her romantic relationship with American comedian, rapper, and television host, Nick Cannon. Indeed, she dated Nick, and that’s how she came to the spotlight. However, that’s not all she and Nick share a baby boy named Golden. In addition to that, their second child is in the way.

It’s already clear that Brittany Bell was one of the lovers of Nick Cannon. Until today he has dated many beauties; however, Bell is someone who’s far more special for Cannon. Indeed, she’s unique to him as we know she’s the mother of his son, Golden “Sagon” Cannon.

According to Amo Mama, Bell and Cannon began to date after the famous December 2014 divorce from Mariah Carey. Precisely speaking, they started seeing each other as a couple in January 2015. Since then, the former lovers were in an on-again-off-again relationship.

Between their times together, Bell gave birth to her first child with Cannon. The young boy was born on February 21, 2017, and is now 3-years-old, as of 2020.

Golden can be easily spotted on his mother’s Instagram post. Indeed, Bell frequently posts pictures of her son on her social page.

Bell, 32, is Pregnant with Another Child by Cannon though Cannon is Rumored to be dating Jessica White

Those who follow Brittany Bell, 32, on her Instagram page do know that she’s about to welcome her second child. The diva announced the news in June 2020.

We can see Bell flaunting baby bump in her recent photos on her Instagram account. She’s very excited to welcome her second baby in this world.

As noted by Cheat Sheet, the father of Bell’s unborn child father is none other than her ex, Cannon. However, interestingly, amid of the happy news of being a dad, there’s a rumor that he’s back with his girlfriend, Jessica White.

Net Worth of Brittany Bell as of 2020

As of 2020, Brittany Bell holds an impressive net worth of $800,000. She holds a six-figure fortune and credits go to her fruitful career in the modeling world.

Speaking of Bell’s income, there’s no official document to vouch for her actual earnings. Due to a lack of factual information, no one can land her exact income. Despite the odds, it’s estimated that she generates an outstanding salary which ranges from $33,774 to $112,519 annually.

How much is Brittany Bell worth?

What ethnicity is Brittany Bell?

The beauty pageant winner Brittany Bell was raised in Barrigada, Guam, with a Chamorro mother and a father of Native American, West Indian, and Black American heritage.

Is Nick and Brittany still together?

No, Nick and Brittany aren’t in a relationship; however, they co-parent their son, Golden and are about to welcome a newborn baby in their life.