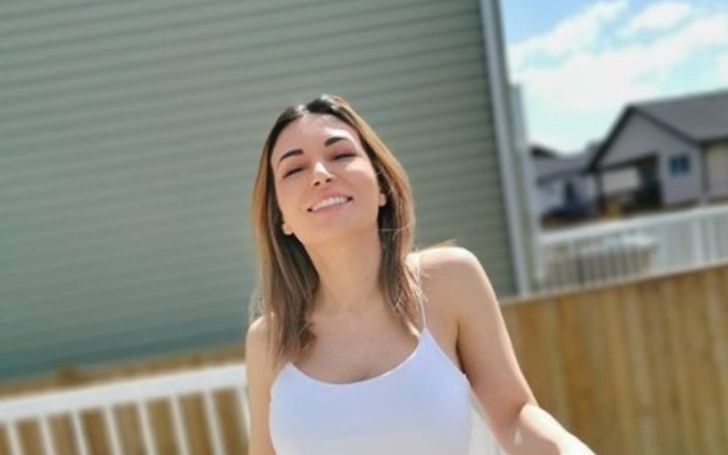 Natalia Mogollon, well-known from her gaming alias Alinity Divine is renowned for her Twitch streams. Yes, she’s a streamer. Her videos are watched by many of her fans, and she’s quite famous for what she does. However, recently Twitch suspended her; if you want to know why keep on reading, as we will share both professional and personal details on her.

Alinity Divine Net Worth as of 2020

As of 2020, Alinity Divine has accumulated an impressive net worth of $1.5 million.

Divine managed to hit a millionaire tagline from her years of streaming entertaining videos on Twitch. She began her journey back in 2012, mainly playing World of Warcraft. Gradually, she also started playing Apex Legends, Valorant, The Last Of Us, Grand Theft Auto V, Mario Kart, etc., which was loved by many making her famous.

Alinity Divine is one of those streamers who have been part of many controversies. Recently, she was even suspended by Twitch. Yes, it all happened when she accidentally showed her nipple during a broadcast on April 24, 2020.

The beautiful streamer deleted her nip slip video as soon as possible. Although the mishap happened unknowingly, many of her fans were upset with Divine for promoting nudity in the social platform.

Divine fans called for the removal of her account in Twitch, according to Insider. Subsequently, she was suspended by Twitch for three days. As all of this occurred without any actual intention, she only got a warning, and now she’s back on Twitch.

Previous to this, Divine was also in different other controversies. One of which grabbed massive attention was animal abuse.

Divine is the owner of three cats named Maya, Nova, and Milo, and further, she also owns two dogs. All of her pets frequently shows up in her live stream. During one of that act, she was recorded giving her cat, Maya, Vodka. How? She took a giant swig of vodka, and her cat licked off her mouth.

Besides that, many of her fans also responded angrily in one of her live streams. In that video, she was caught in her game and threw her cat, Milo, who came in front of her while gaming, as per New York Post.

Is Alinity Divine Dating Anyone?

Talking about Alinity Divine’s relationship status, it’s believed she’s single as of 2020. Therefore. She has no boyfriend at the time we write about her.

Although she isn’t seeing anyone right now doesn’t mean she wasn’t dating someone in her past. Indeed, many reliable sites reported that she was married previously. She tied the knot with a Canadian man who she met during her college days. Unfortunately, they chose separate paths. Thus, they aren’t together anymore.

Alinity Divine was born on January 10, 1988, in Cali, Colombia. We already mentioned her real name is Natalia Mogollon. Her parents raised her; however, details linked with them still live in shadow. Further, she has a brother and a sister as siblings in her family.

Regarding her academics, the 32-years-old beauty went to the University of Saskatchewan in 2012 for a nursing degree in Canada.

It’s no secret to those who follow Divine on her social page; her past was rough. She suffered from different diseases, including bipolar disorder, depression, and an eating disorder. Despite the odds, she fought back and now enjoys her time streaming her gameplay for her fans.

Who is Alinity Divine?

What did Alinity get banned for?

Alinity Divine got ban for wardrobe malfunction during one of her streams.

How old is Alinity Divine?