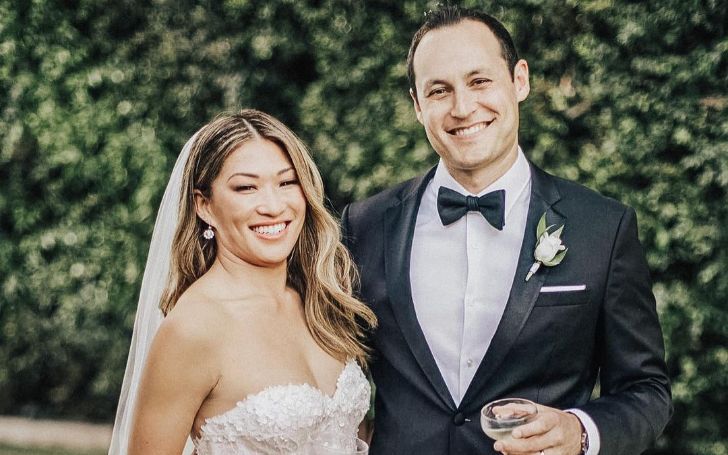 Jenna Noelle Ushkowitz Stanley is a Korean-American actress, singer, producer, and podcast host best known for her roles in Broadway musicals such as The King and I and Waitress and the Fox comedy-drama series Glee as Tina Cohen-Chang. She is a two-time Tony Award winner for her work on the Broadway musical Once on This Island and The Inheritance as a producer (play).

When Jenna was three years old, the Korean-American actress appeared on Sesame Street and other children’s television shows. In the 1996 revival of The King and I, she made her Broadway musical debut. Ushkowitz and her Glee co-stars went on live concert tours in 2010 and 2011, performing in the United States, Canada, England, and Ireland, respectively. Let’s know about her relationship timeline besides her professional life.

Jenna Ushkowitz is a happily married woman. She tied a knot with her long-term partner David Stanley on July 24th in front of 104 of their closest relatives and friends at a historic home in Los Angeles. Netta BenShabu and Kinsley James Couture Bridal created her stunning gown, including an embroidered floral motif.

The beautiful lady told Brides, “We were ecstatic and so glad that we didn’t have to rush our wedding and that we got to experience the day of our dreams.” “We were able to share it with our friends and family because it was such a wonderful gift.” Because of the ongoing Covid epidemic, the couple who crafted Jenna’s engagement ring knew their wedding would be modest.

Also See: Who is Joann Winkhart Married To After Divorcing Criss Angel? Learn All The Details Here

In August of last year, Jenna announced her engagement to her long-term boyfriend, who she met on the dating app Hinge. The Tony Award-winning producer smiled in the sun-drenched selfie alongside her new fiancé and their beautiful French bulldog bear. Jenna, who rose to popularity as Tina Cohen-Chang on Glee, captioned the photo with “Yes, a million times, yes,” holding up her round-brilliant cut ring. She published a black and white snapshot of them in brighter times on Instagram at the time.

Jenna Ushkowitz had previously been in several partnerships. Kevin McHale, her Glee co-star, was her boyfriend. Kevin is an American actor best known for his role on the television show Glee (2009). The former couple started dating in April 2009 and divorced in October 2010.

Following that, the 35-year-old began dating Michael Trevino. Michael also works as an actor. Since July 2010, the ex-couple has been dating. They were together for over four years. However, things began to fall apart, and they divorced in May 2014.