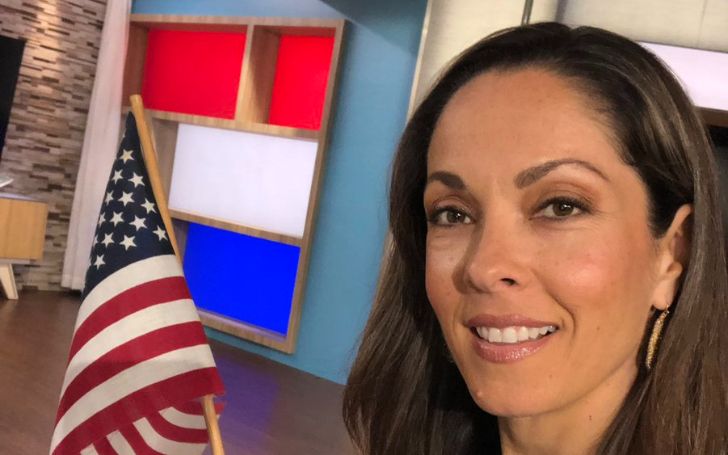 There might be a few people who love their job more than Maria Sotolongo. The Spanish-American journalist has been working for CW39 as a meteorologist for a few years. Prior to this, she was working for Provicom, Fox Television, and Telemundo Houston. Grab all the information about the lovely and versatile Maria’s job details and get insight into her personal life!

What is The Pretty Maria Sotolongo’s Relationship Status? Has She Been Taken Already?

Journalists are often known for being secretive about their life, especially their private life but the same does not apply to Maria Sotolongo. She is living a blissful married life with her husband, Felipe Sotolongo, for a long time.

From the news anchor’s social media, we learned that the duo began dating in 1995. After a few months of romantic chemistry, they decided to take their relationship and got engaged in January 1996. It only took them a year after that as they became hitched in front of their close ones in 1997.

You May Also Like: CW39 Anchor Courtney Carpenter’s Married Life And Kids!

From her marriage, she shares three children, two sons and a daughter with her spouse. Her family often appears on her social media like Facebook and Twitter.

Maria is occupied with her hectic work most of the time, but in her spare time, she likes to be with her partner and kids. She is living in Houston with her beloved ones.

Maria Sotolongo possesses a net worth of $4 million from her two decades in the journalism field. She is someone who is well respected in the profession and has worked in various positions. Undoubtedly, she makes hefty money from her works.

In her distinguished career, the veteran journalist has worked for many companies in various positions. She worked as a news anchor for Provicom for about seven months in 2017.

Mrs. Sotolongo served as a entertainment reporter and meteorologist for Fox Television for four years and seven months. Before that, she was a meteorologist for Telemundo Houston KTMD from February 2001 to March 2002.

Check out the clip of Maria Sotolongo anchoring her show Morning Dose in CW39!

Right now, she is working at Houston’s CW39 news channel. She is a meteorologist and anchors the program Morning Dose from Monday to Friday from 6 am to 9 am.

Maria Sotolongo was born in Spain, but her family moved to Houston, United States, when she was ten years old.

The mother of three has two Bachelor’s Degrees in Communications. She received her degree in Communications, Radio, and Television at the University of Houston. Likewise, she got a degree in Broadcast Meteorology from Mississippi State Univerity in 2006.

At 19 years old, she stepped into journalism, working as a meteorologist for Telemundo Houston in Houston, Texas.

After devastating Hurricane Harvey in 2017, she created the documentary Changed: When the Dams Opened, which went to receive numerous awards.

If you want to read similar celebrity articles, don’t forget to visit the website Featured Biography!