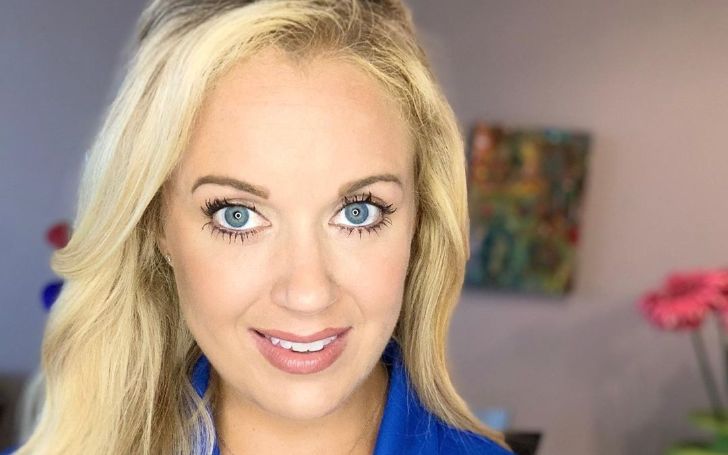 Maggie Flecknoe remains a perfect example of a modern day’s empowered woman with her consistent hardwork to become a successful journalist. While she is famous for producing and hosting a online segment called Online Dish on KIAH-TV, there is more to her than just journalism. In fact, many recognize her as a voice actress who contributed her voice in several animes like ‘Parasyte: The Maxim’ and ‘Mawaru-Penguindrum.’ So, today we bring you close to the personal life, net worth, and career of the charming Maggie Flecknoe.

Talking about the finances and income of Maggie Flecknoe, she has nothing to worry about as she has a settled career in journalism and acting. Specifically, she owns a whopping net worth value of $500,000 as of June 2020. She enjoys a lavishing lifestyle out of her massive income which can be seen from her Instagram, where she travels around new places and loves shopping.

The introduction of Maggie Flecknoe would be incomplete without mentioning her work at CW39. Interestingly, she hosts the morning show at the network from 6 to 9 PM, where she covers all the intriguing stories around the country. In fact, she also covered the shocking George Floyd incident in 2020. She even made her presence in Floyd’s funeral on June 9 at The Fountain of Praise.

Talking about her career, Flecknoe started her broadcast career on 790 KBME ‘The Sports Animal’ and 740 KTRH. Later, she switched from radio to television in 2009 as she joined CW39 Houston. Although she started as a part-time associate producer, she pushed the ranks quickly on-air as a host of the edgy segment ‘Online Dish with Maggie.’ Similarly, she also appeared on the Tribune’s first syndicated show ‘Eye-Opener’ which became ‘Morning Dose.’

You May Like: Get to Know Gray Television Reporter Jacqueline Policastro’s Net Worth.

Flecknoe isn’t limited as a reporter alone as she worked as a voice-actress in several movies. She contributed with her voice in different anime movies such as Yukari Yukino in ‘The Garden of Words’ and ‘Majestic Prince – Teoria.’ Furthermore, she also appeared in various commercials with former NBA superstar Yao Ming and singer Lady Antebellum. Similarly, she also performed at the Alley, Upstage, and Texas Repertory Theaters.

Born on April 17, 1983, in Aurora, Colorado, Maggie Flecknoe never disclosed anything about her family background or love life. Consequently, there is no clue on whether she is single, married or dating anyone. Regarding her academics, she completed her Bachelor of Science degree in Journalism and Broadcast News from the University of Colorado at Boulder in May 2005. In the same year, she went to Harvard University and the Moscow Art Theatre School where she earned a Master’s degree in theatre.

Flecknoe loves to go shopping and listening to music in her free time. Similarly, she bagged the 2nd Annual Behind the Voice Actors Anime Dub Award in 2013 for ‘The Garden of Words.’ Despite being a Colorado native, she currently lives in Houston, where her work is centric. She is also a dog lover.