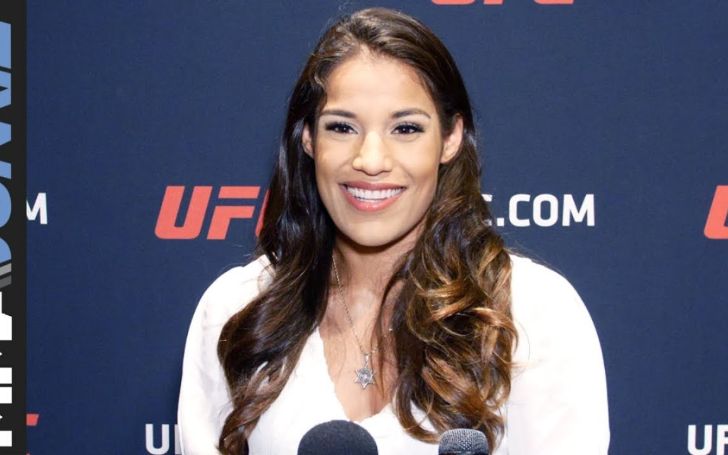 Julianna Pena (b. August 19, 1989), an American mixed martial artist, is one of the Ultimate Fighting Championship (UFC) ‘s fighters. Recently, her victory over Sara McMann garners massive attention. Further, after the fight ended, she showed guts to challenge Amanda Nunes (Brazilian professional mixed martial artist), which increased the hype. Let’s learn everything there is about her on this page.

Julianna Pena is estimated to hold an outstanding net worth of $500 thousand as of now. She manifested a six-figure fortune as a fighter.

As mentioned earlier, Pena is one of the best UFC athletes. His recent match against Sara McMann might be a perfect example of how good she is at what she does? On that night, she made Sara tap out with a slick rear-naked choke.

After her victory, Pena called out Amanda Nunes for a match. Yes, she challenged the Brazilian professional mixed martial artist for a battle.

Click To Know: Gianluca Cugsnetto’s Net Worth and Relationship Status

Talking more about Pena’s career, she made her professional MMA debut in May 2009 and won four consecutive fights but tasted her first defeat in April 2012.

Unfortunately, Pena also ended up in an accident while she was flourishing in the MMA. Precisely, she got involve in an accident with a drunk driver. It happened while she was walking in downtown Spokane. The 31-year-old professional fighter was knocked unconscious and suffered a broken nose.

Luckily, Pena recovered from that incident and returned ten months later in the ring. After gathering some experience, she entered The Ultimate Fighter. The news was announced back in August 2013. Subsequently, in that same year, she also won the title of TUF 18 women’s bantamweight champion.

Since Pena’s entry into UFC, she managed to earn several achievements, and she will be earning more in the near future.

Besides showing her talent inside the ring, Pena also appeared in the award-winning mixed martial arts documentary called Fight Life in 2013. Furthermore, she’s active as the announcer, along with Max Bretis, for Combate Americas’ English language broadcast on DAZN.

Julianna Pena is married. Yes, she is taken; however, many don’t know anything about her husband. It’s because she hasn’t shared any details on her spouse; thus, not even his name is accessible to media.

Although Pena preferred to keep her marriage away from the camera light, she once shared some information linked with her love-life. Back in October 2017, she announced via her social media handle, Instagram, that she was pregnant with a baby girl.

Besides that, Pena also announced that she would be taking a break from her professional life. Following that announcement in early 2018, she gave birth to her first child, a daughter, Issa Cruz.