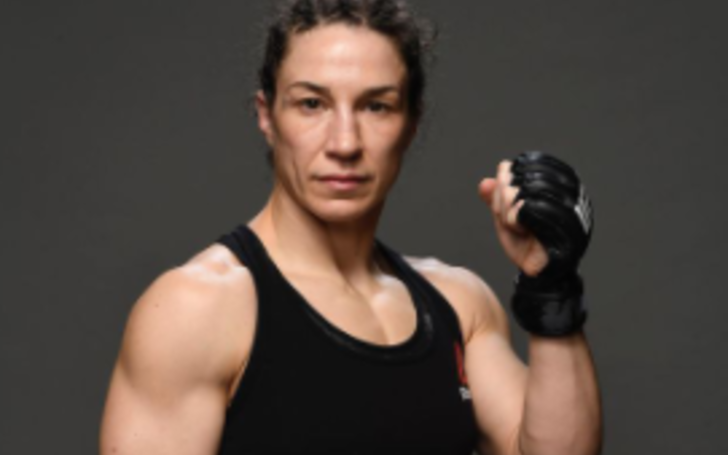 Sara McMann is the ninth-ranked UFC women’s bantamweights champion who has been competing for over two decades with more than half of her career spent in wrestling. She recently took the stage against a top-quality opponent, Juliana Pena at UFC 257: Poirier vs McGregor 2. Let’s discuss her married life, net worth and more below.

Sara McMann is enjoying sound life with her present boyfriend Chad Bingham. He is a professional super fighter at FTWPro 58 CA. The athlete couple met years before but made it official on May 17, 2017.

Chad and Sara announced she’s expecting the birth of a second child on May 30, 2018. welcomed their second child, a son Lucas Allen Bingham on December 7, 2018. Chad, moreover, plays a father figure role to Bella, Sara’s daughter from past relationships.

Past Relationships and Break Ups

In the same vein, Sara and Trent became proud parents to a daughter, The lovebirds announced they were expecting their first baby in 2008. Sara gave birth to daughter Bella Maree Goodale in early 2009.

At that time, Trent was still the head coach of Limestone College while she was getting ready for the Trials. The subsequent birth of their daughter led Sara to a break from competitive sports.

Sara McMann is the first woman of the United States to bag a silver medal in Olympic wrestling which he won at the 2004 Summer Olympics held in Athens Greece. By 2011, Sara agreed on three flight contract with Strikeforce.

On 14 November 2010, she was set to make the debut of mixed martial arts, unfortunately, the event was canceled due to security issues. Followed by ProElite, Invitca Fighting Championship she landed her steps towards UFC. In January, 2015, McMann faced Miesha Tate at UFC 183 but could not make it.

Except for that, she appeared in few movies including Blackbear (2019), ProElite MMA (2021), and America’s Newest Sweethearts (2021). Other than that, McMann is a philanthropist personality too. She gives away some portion of her wealth to Habitat for Humanity. Sara financially aided the victims of the Tsunami in Sri Lanka.

Sara McMann was born on September 24, 1980, in Takoma Park, Maryland, United States. The 40-year-old is the only daughter of Thomas William McMann and Paula Jean. She had a brother named Jason who died on January 23, 1999, at age 21. The 5 feet 6 inches tall athlete holds an American nationality and belongs to white ethnicity. Her star sign is Virgo.

Walking into education, McMann went to McDowell High School in Marion, North Carolina. Amidst sophomore years, she was coached by Timothy Hutchins. Sara earned a degree in Theatre at the Lock Haven University of Pennsylvania. The glowing baby mama attended the Minnesota-Morris University from 1998 to 1999.