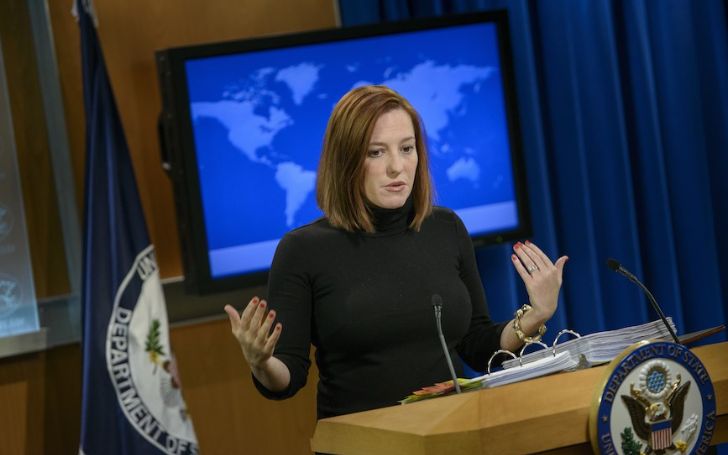 Into politics, then you heard the name Jen Psaki. Previously she served as the White House Communication Director during the Obama administration. Now, she will again make her appearance as the new White House Press Secretary after President-elect Joe Biden takes office. Besides being professionally successful, she also succeeded in copying it in her personal life. She is happily married to her husband, Gregory Mecher, and shares two beautiful children with the love of her life. Please keep reading to learn all about her net worth, marriage, and personal life.

Before talking about Jen Psakii’s net worth, let’s learn about her professional journey. She began her political career in 2001 working in the re-election campaign of Iowa Democrats Tom Harkin for the U.S. Senate. Since then, she has invested herself in working on several political events.

In her long run career, Psaki has worked in the re-election campaign for Tom Vilsack for Governor. She served as the deputy secretary for John Kerry’s 2004 presidential campaign. Further, she stayed active as communications director to U.S. Representative Joseph Crowley from 2005 to 2006.

During her tenure as communication director to Crowley, she also showed her effort as regional press secretary for the Democratic Congressional Campaign Committee, as  Gossip Gist noted. Furthermore, she worked for former President Barack Obama as traveling press secretary and Deputy Press Secretary in the White House. Gradually he was also promoted to Deputy Communications Director back in December 2009.

With a successful career record, Psaki earned senior vice president and managing director position at Global Strategy Group at Washington, D.C. in 2011. During the Obama administration, she also became communication director in 2015.

She also worked as a reporter. Specifically speaking as a political commentator on CNN in 2017. However, she left her job there in November 2020 to join the Biden-Harris transition team. As of now, she is selected for the White House Press Secretary.

Coming to her finances, Psaki estimated net worth revolves around $2 million as of 2022. As per her salary, she makes around $183,000 as press secretary is thought to be. Indeed she is a millionaire, and after learning her career background, it isn’t surprising at all to know she got that level of fortune.

Psaki Alongside Her Husband Gregory Mecher Owns a Single-Family Home

According to Heavy, Jen Psaki, 43, owns a single-family home. She bought that house with her husband, Gregory Mecher.

Previously, Psaki and her spouse owned a three-bedroom townhouse near Georgetown University, which they bought, investing $865,000. There they stayed for more than five years and sold it for $919,000 in March 2019.

Jen Psaki is happily married to her better half, Gregory Mecher. They first encountered while working in the Democratic Congressional Campaign Committee in 2006.

After knowing one another, the duo gradually worked on their relationship and finally tied the knot in 2010, in Ridge, Maryland. Psaki and her beau gave birth to two children. They keep them away from the media touch. However, occasionally she shares about her kids on her Twitter.

Jen Psaki was born on December 1, 1978m in Stamford, Connecticut, as Jennifer Rene Psaki. She was raised by her father, James R. Psaki, and mother, Eileen D. Medvey.

The American political advisor graduated from Greenwich High School in 1996. Subsequently, in 2000, she graduated from the College of William & Mary with an English degree.

That’s all for today, visit the featured biography for more reads like this.