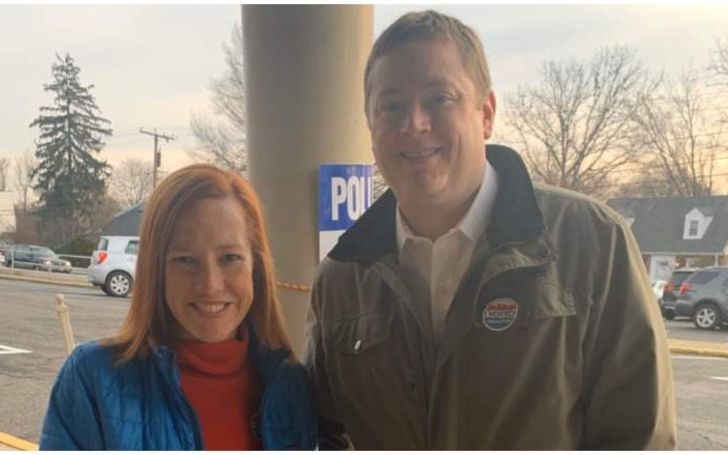 These days many want to learn about Gregory Mecher. Why? Because of his lovely wife. Who is she? Well, she’s none other than Jennifer Psaki, who will be one of the most visible members of the new administration after President-elect Joe Biden takes office. She is picked to be the new White House Press Secretary. Previous to this, she served as the White House Communication Director during the Obama administration; thus, she won’t be new to the environment. However, her new role uplifted people’s desire to learn about her family, and many want to know what kind of man is her better-half. So, today’s article will be all about Gregory Mecher.

Gregory and Jennifer Has Been Married Couple for More than Decade

Gregory Mecher and his beautiful wife Jennifer Psaki are together as a married couple for more than a decade.

Within a great start as a married couple, the two expanded their family by welcoming two children into their life. However, before we spill anything linked with their current situation as a lovely pair, let’s learn how all of it began.

For anyone who lives in this world where billions reside, a common interest is a key to start a relationship between them. In the case of Gregory Mecher and Jennifer Psaki, politics did the work.

When they first met, both worked with the Democratic Congressional Campaign Committee back in 2006, as per Heavy. Sources claim Jennifer was new to the environment as she recently began to work in the communications department, whereas Gregory was a deputy finance director with much more experience.

The duo first interacted over a phone call talking about an event; however, Jennifer mistakenly gave Gregory the wrong direction to that event. Indeed, their first conversation and was all about work, but Jennifer messed up.

Click To Know: All to know about American political commentator Dan Bongino

Gregory was traveling with Rahm Emanuel, then the chair of the DCCC and Jennifer’s wrong directions gave a hard time to them. When she realized her mistake, she was worried the group would be upset when they finally arrived. However, when Mecher came to talk about that, face to face with her, he quickly forgot about the mix-up and suddenly fell in love with her beauty.

Gregory was Nervous to Ask Jennifer on a Date

Love at first sight was what happened to Gregory when he first crossed the path with Jennifer. Although he wanted to ask her on a date, he was nervous. He often created situations to be in front of Jennifer’s desk to earn her attention; however, he frequently failed because she was all into her job working hard.

After some failures, Gregory built up some courage and asked Jennifer on a date but via mail. Luckily she approved, and the duo went on a dinner date in September 2006, as noted by The Washington Post.

The Lovely Pair Gregory and Jennifer Got Married in 2010

With a great beginning, Gregory and Jennifer began their relationship as a boyfriend and girlfriend. However, they were quickly tested when they needed to maintain a long-distance relationship due to their work.

Jennifer started to work for the Obama presidential campaign in early 2007, which lead her to move to Chicago. However, despite the odds, they worked on the relationship, and after the 2008 election, they move in together. Following that, the pair walked down the aisle in May 2010.

The Beautiful Duo are Parents to Two Children

Those who are fascinated with Mecher and Psaki’s works might already know that the duo is parents to two beautiful children. However, because they decided to keep their kids away from the media touch, less is known about them.

Although there isn’t much to talk about Mecher’s children, his spouse, Psaki, occasionally tweets about them. Furthermore, her Twitter bio also proves they are raising two beautiful kids under 5-years-old as of 2020.

Born in September 1976 and raised in Southern Ohio, Gregory Mecher began his political journey while he was still a college student. He went to a boys’ Catholic high school and later graduated with a bachelor’s degree in communication from Northern Kentucky University.

During his college days, Gregory was the “student representative to the Board of Regents.” He also interned under Congressman Ken Lucas, who represented Kentucky’s 4th district from 1999 until 2005. Gradually he began to work in different positions in the political sectors.

Gregory, in his whole life, devoted his time to politics. Recently he began to work as a chief of staff for Rep. Joe Kennedy III of Massachusetts.

Talking about Gregory’s fortunes, he holds an impressive net worth of $900 thousand, according to Wali Kali. With his hard-earned money, he lives a peaceful life with his wife and kids.