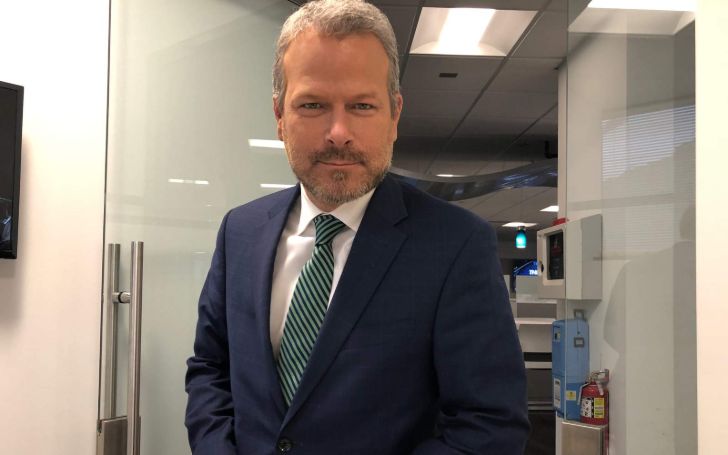 Journalism is among the least preferred work among the people, but Jason Carr has been tirelessly contributing to the news sector for many decades. At the current moment, the American journalist is serving as a news anchor and reporter on Channel 4. Previously, he worked in Fox 2 Detroit. If you wish to learn more about the

Is Jason Carr Married? Who is His Partner?

Jason Carr is in a marital bond with his wife, Taryn Asher, for many years now. Like him, his spouse Taryn is also a newscaster and anchor and is currently at Fox 2 Detroit. The couple worked in the same news channel Fox 2 Detroit for many years.

The lovely pair first met while both were working at WJRT-TV in 2000. After getting to know one another well, they started dating in 2001.

After many years of lovey-dovey, the two decided to get hitched, which they did on October 07, 2007. The duo’s respective family, colleagues, and close ones attended the wedding. They have been living blissfully ever since without any controversies surrounding their relationship.

On February 26, 2011, Carr became a father for the first time when his sweetheart Taryn gave birth to their adorable daughter, Gia Carr. In spite of their busy profession, the two take ample time and works well together in caring for their child.

The former Fox 2 Detroit anchor lives a happy life with his family. The Carr family lives in Bloomfield Hills.

Carr family is an animal lover and has two pet dogs, a Labrador Retriever Violet and Chihuahua Charli. Likewise, he often uploads pictures of his activities on his social media.

Jaason Carr has a net worth of $2 million from his many years of career serving as an anchor and reporter. In addition, his wife, Taryn Asher, has been working for a long time in the journalism field and holds a net worth of $1 million.

In his illustrious career, the Live in the D anchor has worked for several news channels. He worked in Michigan-based WJRT-TV in the early 2000s before working for FOX 2 Detroit.

Check out the clip of Jason Carr anchoring Live in the Don Click on Detroit Local 4!

In May 2016, the Michigan State University graduate bade his farewell to FOX 2 News due to corporate cuts. Subsequently, he transferred to another Detroit TV station WDIV-Loval2/ClickOnDetroit in the position of digital anchor and reporter. Upon joining WDIV-Local 4, he thanked and expressed his excitement in working for the company and its viewers.

To read more similar celebrity articles, be sure to check out Featured Biography!