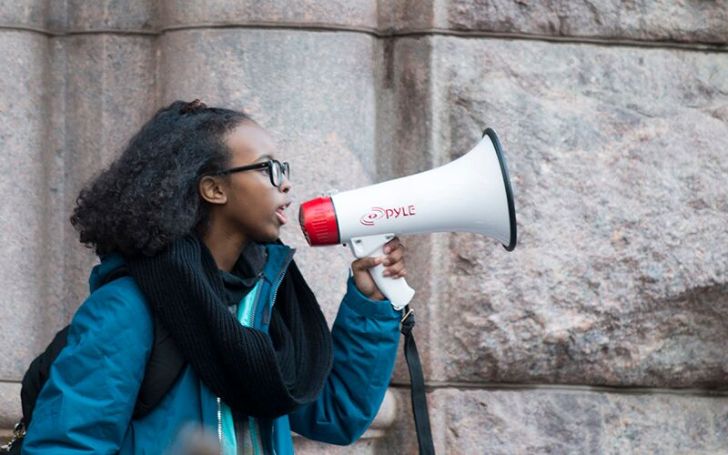 Born on February 22, 2003, Isra Hirsi is a young American environmental activist. At an early age, she succeeded in gaining massive success after initiating several actions as an activist. Besides her rising fame through her movements, she is also renowned as the daughter of the American politician Ilhan Omar. Let’s know more about her on this page today.

As of 2020, the environmental activist, Isra Hirsi is 17-years-old. She celebrates her birthday on February 22 every year.

Isra was born to her mother, Ilhan Omar, and father, Ahmed Hirsi. Her parents got engaged back in 2002. In the same year, they applied for a marriage license. However, it never got finalized, and their relationship lived in a faith-based marriage, which came to an end in 2008. Besides Isra, her parents also welcomed another child when they were together.

A year after the separation, Isra’s mother tied the wedding knot with Ahmed Nur Said Elmi, in 2009. Unfortunately, that relationship also didn’t last, and it faced a faith-based divorce in 2011. Subsequently, in 2017, they were legally divorced.

In 2011, Isra’s mom and dad restarted their relationship. After a year, in 2012, they gave birth to their third baby, which means Isra has two young siblings in her family. Her parents legally got married in 2018; unfortunately, it didn’t survive, and on November 5, 2019, they divorced.

Currently, Ilhan is in a romantic relationship with political consultant Tim Mynett. They also announced their marriage in March 2020. Speaking more about her family, her grandfather recently died, on June 15, 2020, due to Covid-19.

Regarding Isra’s academics, she studies at Minneapolis South High School. She is a member of her school environment club, and that’s how she began her climate activist activities.

With her rising fame, Isra Hirsi, as an environmental activist, paved her way to Ted Talk. Indeed, she was allowed to deliver her speech in one of the renowned shows where many expert speakers share their views.

Isra Hirsi as an Activist

Isra Hirsi never got afraid to share her ideas and raise her voice for the betterment of society. Thus, her brave soul motivated her to do something against climate change. Therefore, she co-founded and also served as the co-executive director of the U.S. Youth Climate Strike.

In 2019, Isra’s efforts as a climate activist got noticed by the world, and she received a Brower Youth Award. Subsequently, she won the Voice of the Future Award.

At a young age of 12, Isra joined the protest where the crowd was asking justice for Jamar Clark. The strike was performed after two police officers from Minneapolis shot down a 24-years-old, African-American man, Jamar.

Currently, she is active in the Black Life Matters movement.

Isra Hirsi isn’t involved in any income-generating activities; thus, nothing can be shared regarding her own financial details. But her mother has been watering her career in American politics. She is a member of the U.S. House of Representatives from Minnesota’s 5th district.

Talking about Isra’s mother’s income, she earns an impressive salary of $125,000 annually. Further, with her years of hardship, she accumulated a massive net worth of $3 million, as of 2020. Thus, we can say, Isra lives in luxury along with her two siblings.