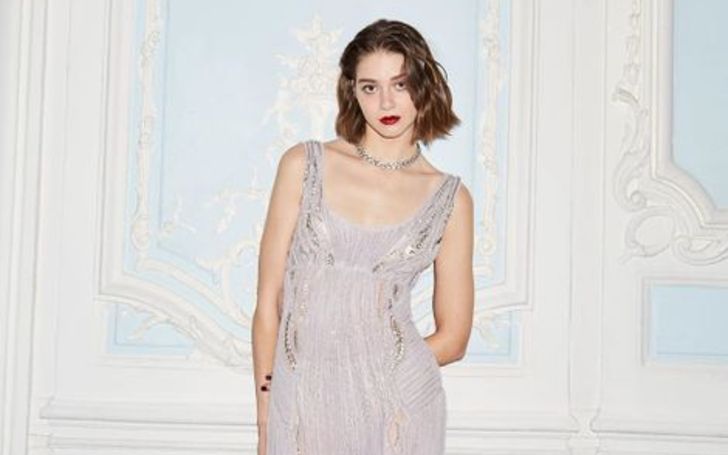 Emma Appleton has been one of the actresses who has rose fan’s curiosity. The English lady Besides acting, she is also a model and has worked for several brands to this day.

Is Model Emma Appleton’s In a Dating Relationship? How is Her Lifestyle?

Emma Appleton is likely single and not in a relationship with anyone right now. There are no rumors of her romance in the media, and that goes for her past as well.

The 1.80 meters tall lady has a noticeable presence on social media, but to this day, she has never spoken her love life and not hinted to anyone as her boyfriend. It seems she prefers to remain alone for the time being.

Emma is usually busy with her acting and modeling work, but in her spare time, she loves to spend some quality time with her close ones. She posts pictures and videos of her work and private life on her social media.

Controversies and celebrities are like two parts of the same coin and is bound to happen at one point of their life. One such case Emma Appleton went through was in 2014 when renowned American photographer Terry Richardson allegedly sexually harassed her online.

Apparently, Richardson sent a message to her through messenger offering her a Vogue shoot in exchange for sex with him.

The supposed message sent by the 53-year-old read:

The 28-year-old shared the screenshot of the message on her Instagram for a short while before removing it. Many people saw it, and media and tabloids published the news, and it spread like wildfire all over the internet.

Media and people criticized the photographer for his improper behavior and later denied the allegation stating it someone imitated him and sent it from a fake account.

After the incident, however, Vogue US made a statement that it will not work with Terry again.

Emma Appleton has a net worth of $600,000 from her career as an actress and model. In her modeling job, she’s modeled for companies like Fred, Toni & Guy, Rimmel, Perry, and Converse. Likewise, she also featured in popular magazines like Huf and Spindle.

As for acting, her breakthrough work was in Clique, in which she portrayed the character of Fay Brookstone. In the season one of the British thriller, she was one of the main cast members working alongside actress Aisling Franciosi, Louise Brealey, Emun Elliott, Jack Bannon, and many others.

Check out the clip of Emma Appleton starred Netflix series The Witcher!

Born in December 1991, Emma Appleton was born and raised in Witney, Oxfordshire, England. For her studies, she attended West Witney Primary School and later to Wood Green School in Oxfordshire.

The Genius star started her career as a hairstyle model when she was 16 years old. After her parents recommended her to try full-time modeling, she applied and signed with D1 models. At present, she models under the UK basked modeling agency, 42 Management.

Appleton made her acting debut after playing in the short movie Dreamlands in 2016. Correspondingly, she made her television debut in an episode of The End of the F***ing World in 2017.

To read more similar celebrity biography, be sure to check out Featured Biography!