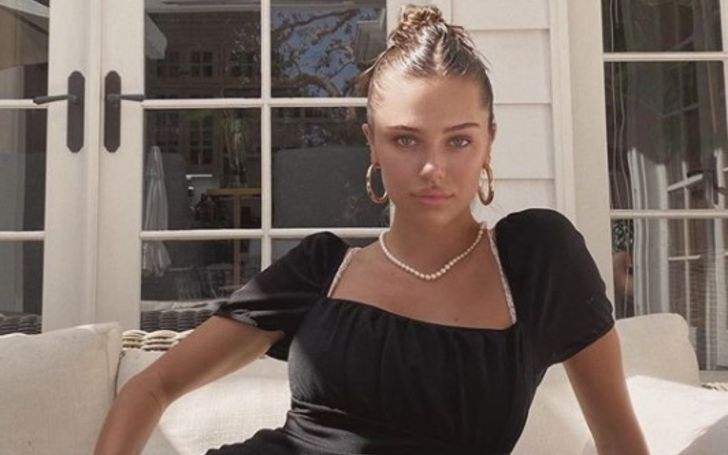 Delilah Belle Hamlin is a star kid who is paving her way to be a successful celebrity like her parents, Lisa Rinna and Harry Hamlin. She has a younger sister, Amelia Gray, and a half-brother, Dimitri Alexander. Let’s know more about her on this page today.

Born on June 10, 1998, in Los Angeles, California, USA, Delilah Belle Hamlin is currently 22-years-old. She is a beautiful daughter to her dad, Harry Hamlin, and mom, Lisa Rinna. Further, she is a lovely elder sister to Amelia Gray. Besides them, she has an elder brother, Dimitri Hamlin, who was welcomed in this world by her father with his ex-lover, Ursula Andress.

The 5ft 7/5in, Delilah went to New York from the City of Angeles to begin her college studies. She joined New York University. In addition to education, she also left LA to gain more knowledge on modeling, according to Bravo TV.

The Real Housewives of Beverly Hills’ daughter, Delilah Belle Hamlin is in a romantic relationship with her lover. Yes, you read it right; she is dating someone special.

Delilah is with her hot boyfriend, Eyal Booker, and the pair has been traveling around Europe this summer, according to Just Jared. They began their relationship in April 2019 and are doing quite well together.

Talking about Delilah’s dashing lover, he recently turned 25-years-old. Besides showing up in the media with Delilah, Eyal was on-screen as a contestant on Love Island.

Net Worth of Delilah Belle Hamlin as of 2020

To know Delilah Belle Hamlin’s financial status, we need to learn her professional journey. There are no reliable sites that would break down her net worth collection; thus, gaining ideas on her uplifting career is very necessary.

The budding model, Delilah Belle Hamlin, without a doubt, enjoys an exceptional lifestyle as a celebrity kid. However, like everyone, she wants to leave her own image in this world. For that, she is watering her career as a model and challenging herself to be like her parents, a successful star.

Delilah appears in the reality show, RHOBH, as her mother is a cast member of the program. We can see her in several episodes of that series. Further, she once showed up in another reality show, Harry Loves Lisa, in 2010.

Besides modeling and acting, Delilah is establishing herself in the fashion world with her gorgeous sister Amelia. The sister’s duo planned to start a clothing line business, which they launched in October 2019.

Delilah and Amelia named their firm, DNA and they are running the company with a partnership with LA Collective, as per Heavy. As Delilah is doing great as a model and businesswoman; further, she is also in a reality show; therefore, we think she holds an impressive net worth of $1,500,000, as of 2020.