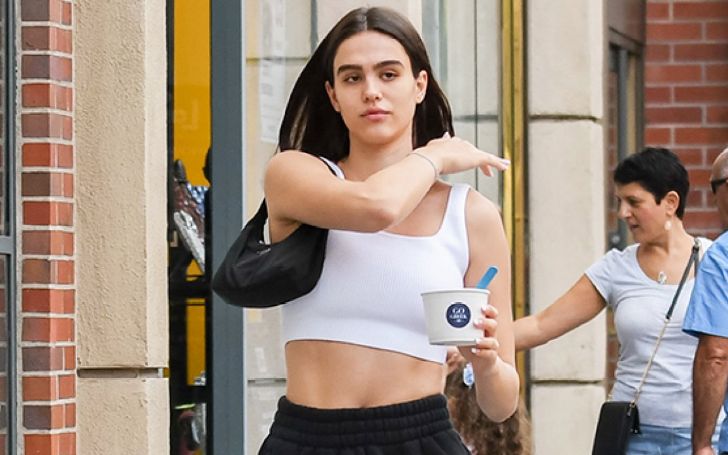 Amelia Gray Hamlin is one of the daughters of the renowned celebrities, Lisa Deanna Rinna and Harry Hamlin. She is a star kid and is quite famous in the crowd from her appearance in the popular reality show, The Real Housewives of Beverly Hills. As her mother is the cast of that show since 2014, we can frequently see Amelia and the rest of her family on the screen. Let’s know more about her on this page today.

Amelia Gray Hamlin was born on June 13, 2001, in Los Angeles, California, USA. She is daughter to her parents, Lisa Rinna and Harry Hamlin. In her family, she has a lovely elder sister, Delilah Belle, who is three years older than her. Further, she also has a half-sibling, a brother, Dimitri Alexander, from her dad’s previous relationship with actress Ursula Andress.

The 19-years-old, Amelia planned to transfer to the University of Southern California, according to People. She attended college as a freshman to study food, nutrition, and psychology in New York City. She joined the institution a year ago, for which she moved from Los Angeles to New York City. However, she is back in LA and wanted to continue her academic journey there mainly due to her anxiety.

Talking about her anxiety, Amelia faced some problems a couple of years ago, which still hunt her. As a celebrity kid, it is natural for people to notice her every step and something like that happened to Amelia and her sister, Delilah.

According to sources, when Amelia was in ninth grade, one of her teachers began to dissect bad things about her mother in front of the class. This started all of her friends to dislike her. Due to which she and her sister were ultimately pulled from the school by her parents.

Unfortunately, that incident affected Amelia deeply, and she went into a depressed state. She developed anxiety and an eating disorder, Anorexia. Luckily, she recovered a lot lately. As per Daily Mail, she got a warning from a doctor from UCLA that if she doesn’t add up some weight, she would only stay alive for four months. After learning that she rapidly put on some weight and slowly recovered from it.

Net Worth and Career Details of Amelia Gray Hamlin

Amelia Gray Hamlin is growing up in luxury, as both of her parents are successful celebrities with millions of dollars in their bank. However, she do have her own earnings. Indeed, like her dad and mom, she is into the entertainment business following their footsteps. Her net worth is estimated to be $1 million, as of 2020.

The young Hamlin is active as a gorgeous model. She is also working in the TV series Rachel & the TreeSchoolers and, further, we can see her work on screen, as herself in a couple of her parents’ reality shows, Harry Loves Lisa and The Real Housewives of Beverly Hills.

Regarding Amelia Gray Hamlin’s love life, there is no secret to reveal, why? Well, everyone in the media knows she is dating her dashing boyfriend, Mercer Wiederhorn.

The lovebirds began to date in summer 2019, and they are watering their relationship every day learning something new about each other.