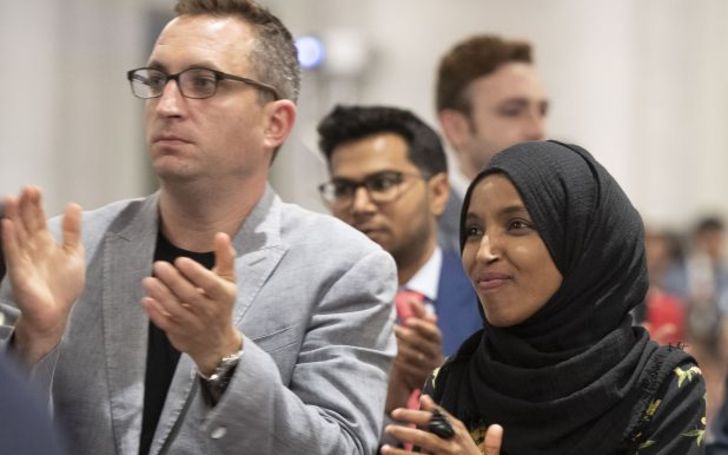 Tim Mynett is known as Somali born Congresswoman Ilhan Omar’s campaign worker and her third husband. The couple was popular after the news about their dating rumors spiraled out of control in the media. Both the pair divorced their spouse of the time in order to be together. So, today we get to know more about Ilhan Omar’s husband Tim Mynett, his net worth collection, love life, and relationship.

As of now it’s a little hard to estimate the net worth collection of Tim Mynett due to his privacy issues however sources estimate the amount is somewhere around $500,000. He’s managed to collect his income by working as a political aid for a long time and heavily relies his cordial relationship with his consulting groups.

Back in 2018, it was also said that he along with his company E. Street Group was paid a staggering amount of approximately $230,000 through his current wife Ilhan Omar. At that time she paid a hefty amount to the company for the fundraising consulting, internet advising, digital communication and travel expenses.

You May Also Like: Deidre Ball’s Husband, Children, Career, and Net Worth

Now that we’re talking about Congresswoman Omar, fans should know that the American politician holds a colossal net worth collection of $3 million as of 2020. It is estimated that she makes a handsome six-figure salary of $125,000 through which she enjoys a lavish lifestyle for her and her family.

Both Tim Mynett and Ilhan Omar were in a committed relationship with their partners before they finally got together on 2020. Before that, Omar was engaged to her then boyfriend Ahmed Abdisalan Hirsi. Due to some complications their marriage didn’t get a legal license but still they then welcomed three of their children during their time together.

Although they separated for a brief while and the Congresswoman married second husband Ahmed Nur Said Elmi. That marriage was also called off after a while and she got back again with her second husband Hirsi. After a couple of years, they too went separate ways on November 5, 2019.

As for Mynett, he was also married with a lady named Beth Jordan Mynett. The couple shared a son on their time together but divorced later when Ilhan came into the picture. However their divorce got nasty as, Beth claimed that Mynett was cheating on her way ahead by having an affair with his Omar.

Tim Mynett is popular for being a political aide and a strategist for a number of politicians throughout his time. He’s especially known for his talent, hard work, and dedication in his work field. Some of his known clients are Keith Ellison, Ilhan Omar.

The 38-year-old works as a partner at the E Street Group and provides his high-level expertise, plans, develops and executes strategic financial plans for his clients. He’s attended the State University of Albany with a degree in Political Science.