Tanya Charry is a journalist, TV host, and reporter with a more famous love life than professional life. Let’s find out more about her relationship status, net worth and early life. 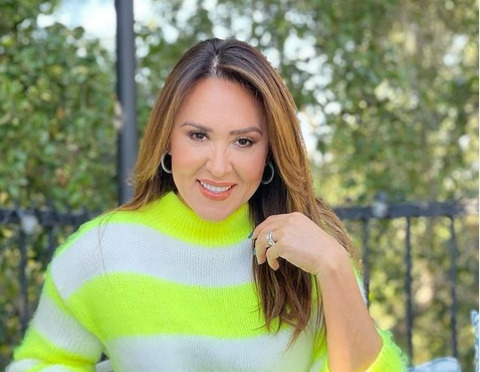 Tanya Charry is a married woman. She is married to Sebastián Jiménez. Sebastián is a popular and renowned television and film producer and is more popularly known as an Emmy winner. The two first met on a blind date set up by one of their mutual friends at Caviar Russe, a restaurant in Miami.

Sebastián was widowed in 2018. From his previous marriage, he has a daughter named Zoe. Tanya bonded well with his daughter before getting married. Jiménez uniquely proposed his lady love. In the middle of the show, ‘The fat and the skinny,’ he proposed to her in between the show that the whole United States watched.

The Television host said yes to the proposal, and they tied the knot on August 7, 2021. The couple’s wedding ceremony was held religiously at St. Hugh Catholic Church in Miami with only around 150 guests. Charry’s wedding gown was from the Dominican fashion designer Oscar de la Renta.

The wedding was attended by many of the big names of the media and entertainment industry. The celebrities who attended the wedding included Lili Estefan, Raúl de Molina, María Antonieta Collins, Jomari Goyso, Carlos Ponce, Karina Banda and so on. As of now, the small family lives in a luxurious mansion in Studio City, California.

Tanya Charry Net Worth and Career

Tanya Charry is a journalist, Tv host and reporter. She is famously known for presenting the program El Gordo y La Flaca. The Colombian presenter is recognized nationally in the United States.

The now 47-year-old started her career by working on Escándalo TV in 2001. She is currently working in the Latin entertainment TV show El Gordo y La Flaca on the Univision Network. She has interviewed many big celebrities like Shakira, Marc Anthony, Juan Gabriel, Luis Enrique, and many more on her TV show.

Tanya is considered one of the best Latin entertainment reporters. She has been nominated for a Daytime Emmy Award for Outstanding Daytime Talent in a Spanish Language Program in 2015 and 2017. As for her net wealth, she has not revealed it to the public yet. However, as the sources tell, the now 47-year-old has an estimated net worth of $300,000.

Tanya Charry was born on March 12, 1974. She is of Colombian origin, born in Barranquilla, Colombia. She was brought up in Colombia. Though a media personality, Tanya has well kept her personal life away from the media attention. Thus, there is no information about her family life: her parents and siblings.

As for Charry’s academic qualifications, she has not given any details on them. However, after completing her education, she moved to Miami, Florida, the United States, to establish her career in journalism. There is no further information on her early life.