With over 35 successful years in the Television industry, Lili Estefan has become a household name and has won the hearts of many with her spunky personality and signature smile. Let's get to know more about her relationship status, net worth and early life. 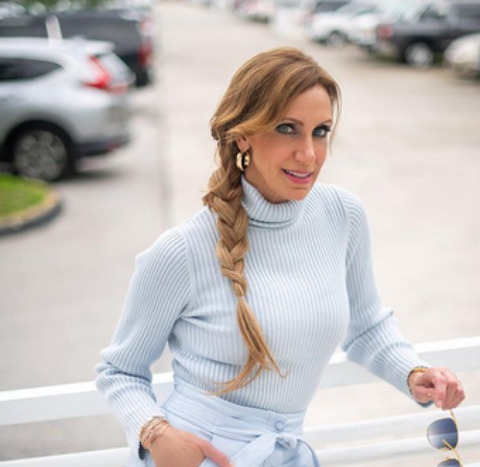 Lili Estefan is currently single. She has been married once but divorced after 26 years of being married. Her ex-husband is Lorenzo Lauces, a Cuban businessman. The two had tied the knot in 1992. The ex-couple shares two children; son Lorenzo Lauces Jr. (b. October 30, 1999) and daughter Lina Teresa Lauces (b. August 2, 2002).

In 2018, the two got divorced. The cause of the divorce was Lorenzo’s infidelity. The paparazzi had taken photos of Lorenzo with another woman and had threatened him to publish the photos unless he paid $200,000. As of now, Estefan is enjoying her life as a single mother with her kids.

Lili Estefan Net Worth and Career

Lili Estefan is a Cuban American model and television presenter. She has been a co-host of El Gordo y la Flaca (The Scoop and the Skinny) on Univision for a long time now. She is also one of the judges on the American Spanish language dance reality show Mira Quien Baila that translates to Look Who’s Dancing in English.

In 1986, Lili got her big break in the television industry as one of the main hostesses of the long-running Spanish language variety show, Sábado Gigante. She hosted the program for 12 long years. Then in 1998, the now 54-year-old was offered to co-host the celebrity gossip show, El Gordo y la flaca, for the same network, Univision. From that show, she gained her nickname, La Flaca, meaning The Skinny Girl, in English.

Estefan is the niece of the celebrity couple Emilio Estefan and Gloria Estefan. In 2020, she began appearing on the Facebook Watch series, “Red Table Talk: The Estefans,” alongside her aunt, Gloria Estefan and her cousin, Emily Estefan. The model has also appeared in the movies: Zombieland: Double Tap and Salud! A Guide to Good Health for Latinos. She has appeared in the TV series, Pa’lante con Cristina, Oprah Prime, Arranque de Pasión, Today and The Drew Barrymore Show.

The television personality received a Lifetime Achievement Award at the 33rd Annual Premios TVyNovelas in 2015. At the 14th Annual Hispanic Television Summit in 2016, she got an award for Outstanding Achievement in Hispanic Television. In 2017, the now 54-year-old received the Career Award at the Premio Lo Nuestro Awards. She also received a Daytime Talent in Spanish Emmy Award from the National Academy of Television Arts & Sciences in 2018. As for the television presenter’s net wealth, according to celebrity net worth, her net worth is a whopping $10 million.

Lili Estefan was born on March 20, 1967, in Santiago de Cuba. Her full name is Liliana Del Carmen Estefan, but she goes by the name Lili in public. Her father’s name is José Estefan. The name of her mother is not known.

When Lili was 10 years old, her mother passed away. After that, her family of three: herself, her father and her brother, Juan Emilio, migrated to the United States. The Cuban American musician and producer Emilio Estefan is her paternal uncle.

After arriving in the United States, the television personality attended the Rockway Junior High in Miami. She then went to the Miami Coral Park Senior High School in Miami and graduated in 1984. She attended the New World School of the Arts and enrolled in a dual college program at the Performing and Visual Arts Center for a college degree.