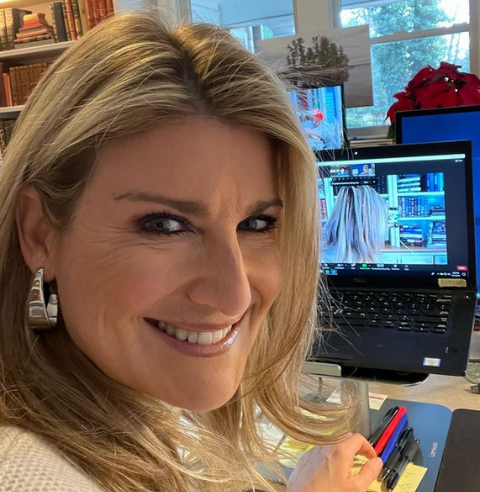 Ashleigh Banfield is a Canadian-American journalist, news anchor, producer, and show host. On December 29, 1967, she was born in Winnipeg, Manitoba, Canada, and has spent more than three decades of her life working in the media industry. The now 54-year-old completed her studies in Canada before moving out to pursue her career in the media industry.

Her parents are John Alexander Banfield and Suzanne Elizabeth Banfield (Holland). She was raised with her two siblings. She became a naturalized U.S. citizen on October 24, 2008. In this article, we will look at her marital and professional lives.

Ashleigh Banfield has finally found the love of her after having gone through a failed marriage previously. Her first husband was Howard Gould, a real estate financier who founded the carbon credit trading firm Equator Environmental. Jay Gould, the railroad developer, is his great-grandfather. The couple married on a wooden yacht at Canada’s Royal Lake of the Woods Yacht Club in 2004.

Although her first marriage was not her “happy ever after,” Ashleigh did have the opportunity to become a mother as a result of it. The former couple has two sons. Jay Fischer Gould, their eldest child, was born on October 22, 2005, and Ridley Banfield Gould was born on May 21, 2007. The reason for the ex-divorce couple’s is still unknown.

The now 54-year-old is happily remarried to her second husband, Chris Haynor. Chris has over 15 years of experience as a digital and mobile marketing, sales, and account management leader. The couple met for the first time on Match.com in October 2014. The couple dated for three years before deciding to marry. They married on December 29, 2017, after a 16-month engagement.

The couple’s marriage was not typical. The wedding took place on Banfield’s 50th birthday. The guests who had gathered thought they were there to celebrate the birthday of the news anchor. The wedding march appeared out of nowhere, much to their surprise. After a while, everyone realized what was going on and cheered. In the presence of about 50 guests, the ceremony took place at the Hermitage Club ski lodge in Wilmington, Vermont. As of now, the pair live together with Ashleigh’s two sons from her first marriage. Her Instagram account is frequently updated with photos of her family.

Ashleigh Banfield’s marital life may have had many ups and downs, but it’s safe to say that she has only experienced ups since beginning her career. She began her career in 1988 and has worked in various broadcast stations. She is currently the host of NewsNation‘s Banfield TV show.

Her career as a journalist began at CJBN-TV in Kenora, Ontario. She later became an anchor at CKY-TV in Winnipeg, CFRN-TV in Edmonton, and CICT-TV in Calgary. She also worked as a producer for CICT-TV in Calgary. In the early 2000s, she was hired by MSNBC, a national cable network. She began working for CourtTV in 2005. (Now known as TruTV)

Banfield has also hosted many shows like HomePage, MSNBC Investigates, Legal View with Ashleigh Banfield, Open Court and Early Start on CNN. She has received numerous awards for her outstanding journalism abilities, including two Iris Awards in 1994 for Best News Documentary and Best of Festival, as well as an Emmy for her reporting at Dallas, TX, broadcast station KDFW-TV.