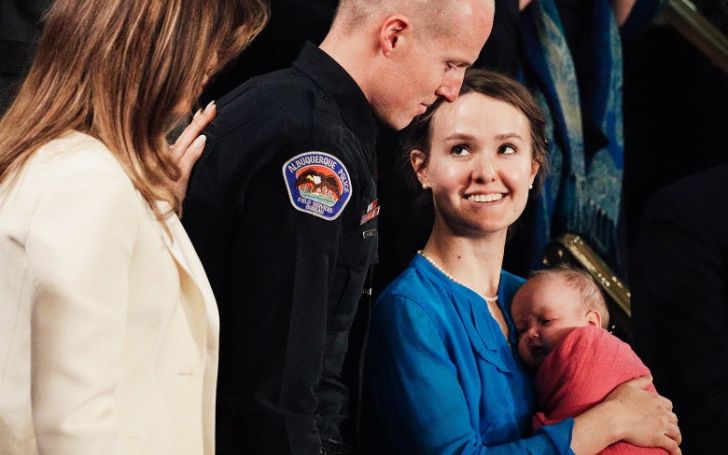 Have you ever heard of times when people think they’ve hit rock bottom, and suddenly their lives get completely transformed? Yeah in movies right? But this is not about some magic by the unknown or the god doings its deed. It’s about a normal and kind act by a human being that created a whole lot of difference in somebody’s life. Rebecca Holets is the very person in talk, so let’s move along to read just what it is about in the article below.

Rebecca Holets is the wife of Albuquerque police officer Ryan Holets. The couple was recently known all over the world for adopting the daughter of a heroin addict lady. The couple already shared four children of their own before they went ahead with the fifth one.

After the adoption, Rebecca also wrote a book on the experience naming it as Surrender: A Love Letter to My Daughter. The pair adopted the baby back in September 2017 and has been raising her ever since.

What Did Rebecca Holets Do ?

It all started through Crystal Champ, a 36-year-old woman who was undergoing some major setbacks in her life. The lady was living on the streets of Albuquerque, New Mexico and had been homeless for over two years. She struggled to pay for her living due to heroin and crystal meth addiction. It also didn’t help that she was eight months pregnant when Rebecca’s husband Ryan Holets found her in the midst of a heroin intake behind a convenience store.

Knowing that the baby’s life could be in jeopardy, Rebecca and her husband adopted the baby born on October who was named Hope. It wasn’t only baby Hope who got a chance at life, her mother Crystal also did. She later went to rehab and has been sober for almost two years. Currently, she can be found devoting herself to help people like her recover from addiction.

You May Also Like: James Stenson’s Net Worth Collection, Career Highlights, and Love Life

As for Hope, even though she was born prematurely by a month, she’s doing absolutely fine and getting all the love she deserves by her new family. The doctors mentioned there aren’t any signs of unhealthiness on her due to her biological mother’s habit of addiction, which is a relief. She’s also in touch with her birth mother and enjoys the love of both the mothers’ Crystal and Rebecca.

The Holets family was also honoured by President Donald Trump and the First Lady during their State of Union Address. The parents made a trip to Washington, D.C. along with five of their children and they also received a standing ovation from the audience.

Trump addressed them as “As we have seen tonight, the most difficult challenge brings out the best Americans, Ryan, and Rebecca, you embody the goodness of our nation. Thank you.”