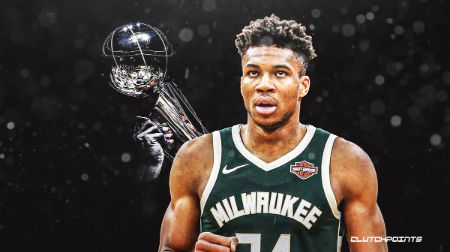 You might know Giannis Sina Ugo Antetokounmpo as the Greek professional basketball player for the Milwaukee Bucks on the National Basketball Association(NBA). Nicknamed as Greek Freak, he was drafted in the 2013 NBA Draft while getting selected as 15th overall by the Bucks. He’s received awards like NBA Most Valuable Player, a four-time NBA All-Star player, and many more. So, today we look at his overall details like net worth collection, girlfriend, and career.

Giannis Antetokounmpo, the NBA Most Valuable Player of 2019, really is the best at what he does. Over the years, he’s proved his talent and dedication with such tenacity that he’s been able to succeed not only professionally but also financially, specifically speaking his net worth collection.

According to Celebrity Net Worth, the basketball champ is worth a staggering number of $60 million as of 2020. His net worth his backed by his handsome salary of $25 million per year. Back in 2016, he signed a $100 million deal with the Milwaukee Bucks for four years.

Most of his earnings are also made via the endorsement deals and sponsorship that he’s been a part of. According to sources he’s earned about $35 million in a span of June 2017 to June 2018 and $43 million from June 2018 to June 2019 just through his endorsement deals. Some of the brands that he’s been a part of are Nike, BMO Harris, Kronos Foods, Tissot, and many more.

Giannis Antetokounmpo used to play professionally through the Greece Basketball team back in 2012. The following year he was drafted #15 through the Milwaukee Bucks in the 2013 NBA Draft and has been with the team ever since. Right after joining, he got named as the NBA All-Rookie Second Team while also earning his nickname ‘The Greek Freak’.

The 25-year-old was the first player to lead the Milwaukee Bucks in all five major statistical categories of total points, rebounds, assists, steals, and blocks while finishing in the top 20 of the season. He got a number of achievements under his name, the most recent ones are NBA Most Valuable Player in 2019, NBA Defensive Player of the Year in 2019-20.

Talking about his personal life, Giannis Antetokounmpo is in a committed relationship with his long time girlfriend Mariah Riddlesprigger. The pair have been together for quite a long time and are still as strong as ever.

They took their relationship a notch higher when they welcomed their son  Liam Charles Antetokounmpo which they revealed to the world on 10 February 2020. The new parents were quick to share their adorable child’s birth via social media, captioning the picture as “Liam Charles Antenokoumpo in the house”.

They decided to keep their sons middle name ‘Charles’ as a tribute to Giannis’s late father who died in 2017.