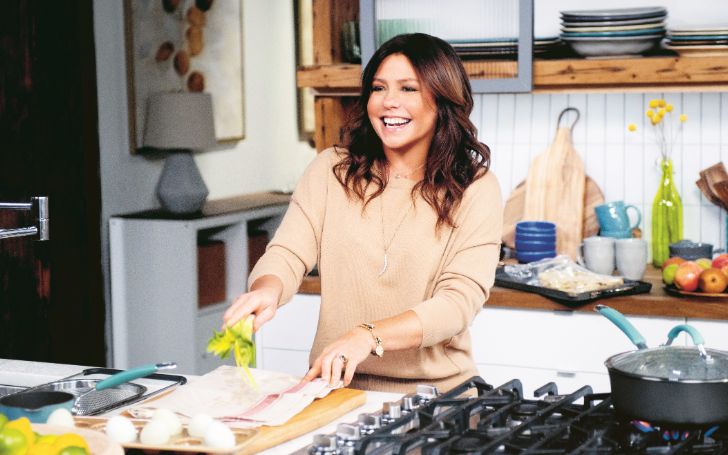 Rachael Ray might be a familiar name if you’re into cooking shows on the television. She’s a successful American TV personality, businesswoman, author and not to miss, a commendable celebrity cook. The lady’s well known to display her spectacular culinary skills on lifestyle show Rachael Ray, 30 minutes Meals, Rachael Ray’s Tasty Travels, $40 a Day, Rachael vs. Guy: Celebrity Cook-Off and many more. So, today we dive deeper to know about the celebrity chef’s personal details like her net worth collection, career and not to miss her love life.

Rachael Ray Net Worth Collection Over The Years

Rachael Ray’s been a public figure in the television as a chef for nearly two decades, and in those years she’s made success not only professionally but also financially. Well, she might just be one of the richest ones at that, all thanks to her flourishing career as a TV chef, specifically speaking the staggering net worth that she’s collected over the years.

According to Celebrity Net worth, Ray holds a smashing net worth collection of $100 million as of 2020. It is said that she earns over $25 million as her salary from various jobs like hosting TV shows, books, endorsements, and many more. One of the things she’s done is actively take part in collaborations which has earned her millions of dollars. The companies she’s worked with are West Point Home, Dunkin Donuts, Pulte Group, and many more.

You may also like: All About WNBA Athlete DeWanna Bonner

Besides these, the entrepreneur is also into real estate. She invested $2.6 million for a 6+ acre compound in Southampton, New York which she listed for $4.9 million. Although it hasn’t been sold till now. As for her own house she lives in a three-unit combined apartment in the Union Square area of NYC. She also bought that apartment for $1.4 million in 2004 and also bought her neighbor’s area for $1.25 million in 2009. In addition to that, she also owns a cabin in the area of Lake Luzerne costing $118,000.

Rachael Ray worked odd jobs on a candy store, managed Mister Brown’s Pub at The Sagamore before she finally established her career in the television. While working at the store, she got her famous concept of 30-minute cooking and then got a chance to appear on a weekly segment on WRGB, a local CBS TV affiliate show. This also led her to write her first book as well as get a chance to work on Food Network.

The TV personality hosted 30 Minutes Meals on Food Network for about 11 seasons from 2001 to 2012. After that she appeared on Rachael Ray, Rachael’s Vacation, and Rachael vs Guy: Celebrity Cook-Off. As of now, she’s written a total of 28 cookbooks that are based on cooking recipes for children, vegetarian meals, burgers, easy meals, and many more.

That’s all, hope you enjoyed it. Make sure you follow Featured Biography for more of these!