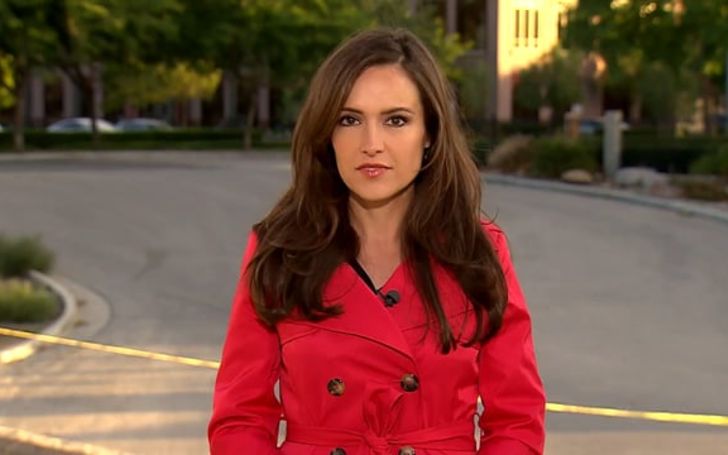 Nikki Battiste is an American producer and correspondent who serves as a correspondent for CBS News. Previously, she worked in ABC News and NBC News. There is so much to learn about this beautiful journalist, so if you are interested in getting her to know better, check out the section below!

Nikki Battiste is Already Taken; Who is Her Significant other?

Nikki Battiste is relishing a happy married life with her handsome husband, Dean Simpson. Her spouse is a Welsh national.

The lovely couple first met in May 2012 at the Standard Hotel in New York City. They began dating shortly after getting to know each other well. The female correspondent told she was blown away by her partner’s beautiful smile.

After being in the relationship for many years, they decided to tie the knot and subsequently exchanged vows on September 05, 2016. The spectacular wedding took place in Oheka Castle, located in Huntington, New York.

Upon completion of the wedding, the newlyweds went to Italy’ Amalfi Coast for their honeymoon. Almost four years into their marriage, the duo has a great journey so far.

Recently on May 13, 2020, Nikki and Dean became parents for the first time when they welcomed their son Beau Nicholas Battiste Simpson. She took to Instagram to announce the good news to her followers. Congratulations to both of them from us!

After the birth of her child, these days, Battiste is busy taking care of him. She is a special love for animals, especially horses, and is an equestrian. Other than that, she is a traveler and loves hiking and visiting and exploring beautiful countries and their places.

Nikki Battiste’s Net Worth And Career

The elegant lady has years of experience in the media, having worked both behind and in front of the camera. She worked as a production associate on Today and Saturday Night Live in NBC News.

After that, she worked as an editorial producer for ABC News 20/20 & PRIMETIME for four years. In March 2011, she became a producer and later as a reporter for ABC News. While working at ABC, she covered news and reports which featured in Good Morning America, World News Tonight, Nightline, 20/20, and ABCNews.com.

Nikki began working as a freelance correspondent at CBS News in May 2017 and became working fulltime from June 2018. Based in New York, she reports news in CBS News broadcasts which includes CBS This Morning, the CBS Evening News, CBSN, CBS News’ 24/7 live, streaming news service.

Nikki Battiste was born in Pennsylvania, United States. She graduated from the University of Pennsylvania with a B.A. in Politics, Philosophy, and Economics.

During her time in the university, she was involved in sports and was the co-captain of the Division I Field Hockey team. After her college, she began her media career at NBC News Page.

For her contribution on the journalism field, she has received several Emmy Awards, Edward R Murrow, and CINE Golden Eagle awards and a Peabody, Deadline, and FrontPage award.