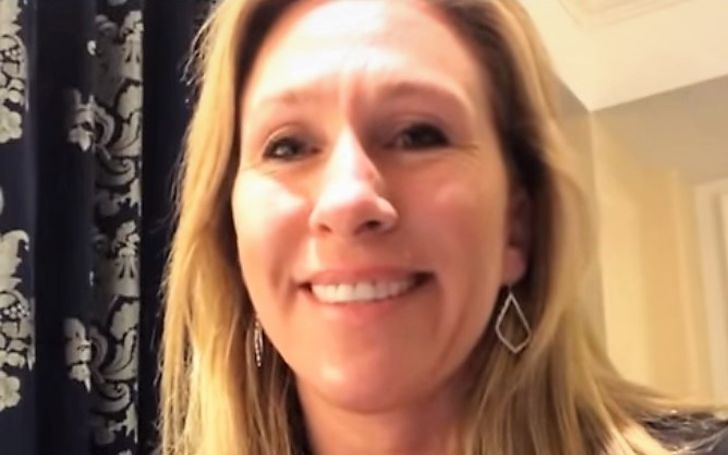 As the US 2020 General Election is on the way, many politicians are working hard to gain the crowd’s attention. Though it might take some time to see the final result of this year’s election due to COVID-19, which means we will still see them on the screen, pointing out their views to win our trust. Marjorie Taylor Greene, as you already guessed by now, is an American politician and, further, a businesswoman from the state of Georgia. Recently, she came to the spotlight for a couple of things that we will share with you today. Thus, stay tuned until the end of the page to learn it all.

Net Worth of Marjorie Taylor Greene as of 2020

There isn’t any reliable source that would claim Marjorie Taylor Greene’s exact fortune; this situation rose because she hasn’t released any data that would lead the media to pinpoint her earnings.

Nevertheless, it’s clear Greene owns a construction company with her beau; thus, many estimated her net worth revolves around $4 million, as of 2020.

Marjorie Taylor Greene began her 2020 candidacy in Georgia’s 6th congressional district, but later on, she shifted her campaign to the 14th district, why? The sudden change was caused after incumbent Tom Graves back down from running in the reelection.

According to Business Insider, Greene won the first place in the recent primary election and faced John Cowan in the runoff election. She defeated Cowan, grabbing victory in the nomination on August 11.

In the primary runoff, Cowan received 43% of the vote, which wasn’t sufficient to win Greene, as per Ballotpedia. From her progress rate, people are even forecasting that she might win a House seat despite her long history of racist beliefs.

Marjorie Taylor Greene has been in a couple of controversies, of which her support for QAnon conspiracy theory went viral. QAnon is a far-right conspiracy theory alleging a secret plot by a supposed “deep state” against President Trump and his followers. However, no part of the theory is based on a fact.

Click To Know: Ilhan Omar’s Net Worth, and Professional and Personal Life

On her behalf, Greene released videos on Facebook, saying that QAnon’s theory was worth listening to. Further, she even posted 57 articles found in the archives of the American Truth Seeker website.

Even Trump pointed Greene as his favorite QAnon Candidate, as per Rolling Stone; however, she distanced herself from the conspiracy theory rejecting the QAnon candidate label.

The 46-years-old Marjorie Taylor Greene is married to her husband, Perry Greene. The couple owns Taylor Commercial, a commercial company located in Alpharetta, Georgia. The firm was founded back in 2002.

Marjorie Taylor Greene was born on May 27, 1974, in Milledgeville, Georgia. She graduated with a bachelor’s degree in business administration from the University of Georgia. Previous to that, she passed out from South Forsyth High School.