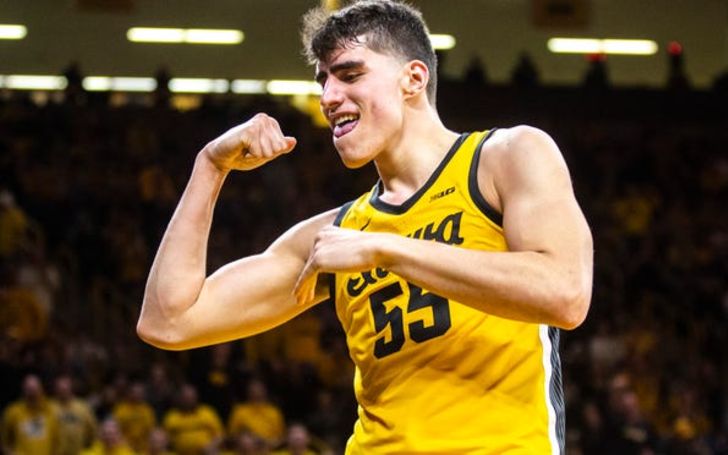 Luka Garza is a promising player who has already achieved incredible feats as a college basketball player and has tons of successful days ahead of him as a professional athlete. Currently, he plays for the Iowa Hawkeyes of the Big Ten Conference. With impressive game stats and records, he was named a consensus first-team All-American and Big Ten Player of the Year. As he’s progressing on his way to a bright career, many people built interest to know more about him. Thus, today we brought you this article where you will find all information on his net worth, career, girlfriend, parents, and many more. Keep on reading to learn it all.

Professional athletes make quite a lot to live a lavish lifestyle and have nothing to worry about when it comes to their finances. It’s a known fact to many, and you guys might be thinking the same about the young rising star, Luka Garza.

Without a doubt same rule will be implied to Luka, but not as of now; why? Well, he is a college basketball player, which means he hasn’t begun his journey as a professional athlete. And currently, college athletes aren’t paid no matter how exceptional they are; thus, his gameplay doesn’t generate greens.

Although Luka doesn’t make a penny from his matches, one who is into basketball can quickly figure out that the day isn’t far when he will make millions of dollars. It isn’t hard to speculate that after going through his records and stats.

Even though Luka isn’t in a contract with professional teams and doesn’t earn from his gameplay, it will be naïve to think he doesn’t have an outstanding net worth. His family background is neat, and keeping that in mind, sources estimate he enjoys a net worth of $1 million as of 2020.

Growing up, Luka Garza was more into soccer, as per The Washington Post. Yes, he started as a soccer player, but to improve his footwork only; however, his plan didn’t as planned due to his size. Later on, after quitting football, he began to give all of his attention to the sport his father loved, indeed, basketball.

Because Luka’s father played basketball collegiately at Idaho, he was in the right hands from the very beginning. His dad assisted him in learning from the best. Garza watched videotapes that his old man collected of former NBA post players. And from observing great plays, he worked on to recreate some magnificent moves of the veteran.

The 6 feet 7 inches, Luka, was a late bloomer in the basketball world. As a freshman attending Maret School in Washington, D.C., he couldn’t dunk a basketball until he was a sophomore. He gradually built up his pace as a basketball athlete.

Luka learned from many exceptional players and coaches. In high school, Garza was coached by Chuck Driesell, son of Basketball Hall of Fame coach Lefty Driesell. Further, he is also trained by Bill Trumbo, Luka’s dad, college coach from Idaho.

After working on his moves, Luka, the kid who found it hard to dunk in his freshman years, is now listed as the Big Ten Player of the Year. In addition to that, he grabbed several other achievements over the years.

Luka was named to the midseason watch lists for the Wooden Award, Naismith Trophy, and Oscar Robertson Trophy. Seeing his growth, he was even declared for the 2020 NBA draft; however, the blooming athlete withdrew from the draft and announced he would stay with Iowa for a while.

Talking about Luka’s gameplay stats, one of his recent ones come from the match against Southern University. The game was held on November 27 in Carver-Hawkeye Arena, where Garza scored 41 points, including 36 in the first half, on 14-of-15 shooting while posting nine rebounds and three blocks in a 103–76 win over.

With Garza’s recent success, he joined John Johnson as the only players in program history to record two 40-points games.

We think it won’t surprise you guys if we say that the young Garza is in a romantic relationship. So, who is the lucky girl that got to live within Luka’s mind and heart? She is none other than his University sweetheart, Maggie Mynderse.

The lovely pair first encountered at the University of Iowa, and gradually, they watered their relationship. We can frequently see the beauty in the crowd, cheering her beau, Luka, during his matches. She even went viral after the camera captured her within the group alongside Luka’s dad supporting her boyfriend.

Luka Garza, 21, was born on December 27, 1998, to his father, Frank, and his mother, Šejla Garza. He belongs to half-Bosnian descent, where his dad is of American origin, and his mom comes from Bosnia and Herzegovina, of Bosniak origin.

Talking about Luka’s parent’s career, it’s already mentioned earlier, his pops was into basketball, but by now, we don’t know about his mother. So, what’s her story? Well, to our surprise, she is a pro athlete who played professionally in Europe.

Luka’s mom is also an executive assistant at the Embassy of Bosnia and Herzegovina in Washington, D.C.

Delving more into Luka’s family, things became clear why he is good at sports. Not only his parents but many of his family members have a history as an athlete.

Speaking of Luka’s siblings, he got a beautiful sister named Tesa Garza in his family, as Hawkeyes Sports noted.