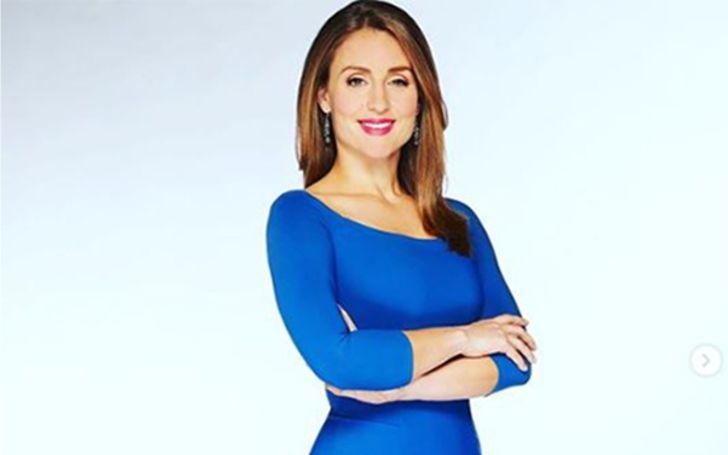 Kristina Partsinevelos is a Canadian news reporter based in New York City and currently working for Fox Business Network. She previously worked for Canada’s Business News Network (BNN) and business correspondent for the CTV News Channel. So, if you want to know more about the veteran journalist’s life, be sure to check out the article below!

Is Journalist Kristina Partsinevelos in a Relationship? What’s Her Marital Status?

Kristina Partsinevelos is currently in a relationship with her boyfriend, Mark Glaire. Her lover works at DPhil Biomedical and Clinical Sciences at the University of Oxford.

It is not learned when the two began dating, but it seems it has been a good couple of years into their chemistry. Mark often appears on his girlfriend’s social media.

The female reporter and her beau often travel to various places of their choice. Although they are yet to marry, both of them look happy and who knows the good news might not be far.

Most of the time, the former CBC reporter is busy with her reporting job, but during her free time, she likes to spend her time with her family and friends, usually traveling places.

Kristina Partsinevelos’s Net Worth And Career

Kristina Partsinevelos has a net worth of $700,000 from her career as a reporter. She has been working for many years as a journalist; she surely receives a good salary from her work.

Check out the clip of Kristina Partsinevelos reporting!

In her career till now, she’s worked in various positions in numerous companies. She worked as a marketing strategy specialist and sales specialist at Insight.

The lady also served as a teaching assistant at Carleton University from September 2011 to May 2013. After that, she joined a TV and radio reporter at CBC. According to her Linkedin, from December 2013 to September 2016, she worked as a Business News Network reporter and CTV Business correspondent at Bell Media in Toronto, Canada.

At present, she is working as a business reporter at Fox Business Network. She does live reporting from NYSE, Capitol Hill, and White House and is a panelist on Bulls & Bears.

Apart from reporting and anchoring shows for Fox, Kristina Partsinevelos also involves in volunteer works. She has worked at Universities and organizations serving in various positions.

The reporter served as a co-chair for Five Days for the Homeless, which works as raising funds for youth homeless shelters in Canada. She also served as a mentor at Carleton University Alumni Association. For two years, she was a stylist for Dress for Success Toronto, where she assisted disadvantaged women in providing career advice and find professional work attire for job interviews.

Kristina Partsinevelos was born on September 30, 1985, in Montreal, Quebec, Canada. She received her high school education at Marianopolis College. She also studied Bachelor of Commerce and Marketing at John Molson School of Business, Concordia University.

The 34-year-old enrolled at Carleton University in Ontario, Canada, where she graduated in Master of Journalism and Broadcast Journalism in 2013. Furthermore, she studied Master of Business Administration at the University of Oxford.

In 2007, Partsinevelos took classes in Health Sciences, Japanese writing and speaking and International Business at Kansai Gaidai in Hirakata, Osaka, Japan. Besides, she is bilingual and is fluent in English and French.