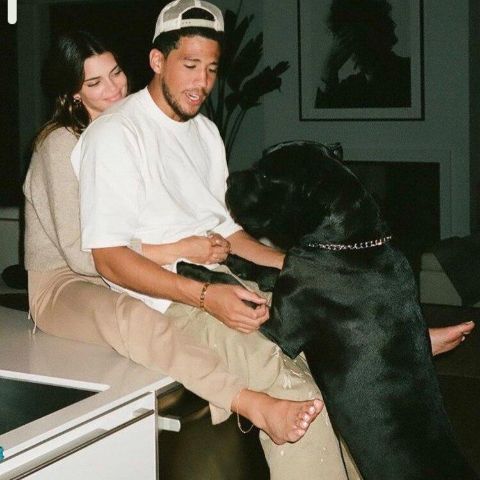 Jenner shared a pair of romantic PDA-filled photographs of the couple on social media to commemorate their special day. The couple was seen snuggling up together while playing with a dog in one photo and sharing a long embrace in another.

The Phoenix Suns guard posted a trio of photos from their time together on his Instagram account, one of which was titled “365” and another “52,” a reference to the number of days and weeks in a year. A final image purported to reveal a glimpse of their anniversary party. The sun was sinking by a waterfront outdoor dining area when he took the photo, which he labeled “1” with an orange heart emoji.

Jenner and Booker, who met on a road trip from L.A. to Arizona in April 2020, made their relationship Instagram public on Valentine’s Day after months of keeping their romance quiet.

Jenner and the model shared a hilarious moment while cuddling on a countertop in Jenner’s holiday snapshot. With a single white heart emoji, the model captioned it.”What started as a casual hookup has turned into a relationship,” a source told PEOPLE at the time. “They’re exclusive, and Kendall is overjoyed about Devin.” “And her family thinks he’s fantastic,” the source added. “He was even invited to Kim [Kardashian West’s] 40th birthday party in Tahiti.

In April, when the love birds were seen holding hands in New York City, a source told PEOPLE that this was the case “Kendall is the happiest she’s ever been in a relationship. While Jenner is “extremely quiet about their relationship,” the insider says it’s “clear that they have something amazing going on.”