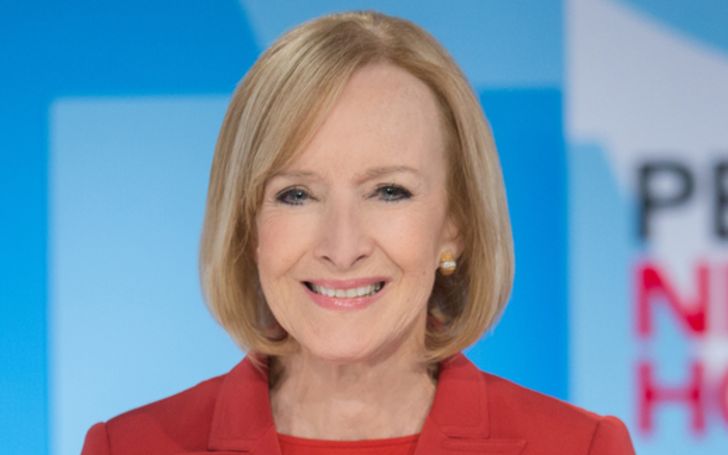 Judy Woodruff is a name that automatically associated itself among one of the most successful and intelligent women journalists out there. She’s an American journalist majorly popular for appearing on the PBS NewsHour as an anchor and the managing director of the channel. Her enigmatic personality completely defines why she is in the level of success right now through her hard-worked hours, packed schedules of long hour broadcasts, interviews, and whatnot. So, let’s get a deeper look at the women in the talk Judy Woodruff.

When it comes to finances, Judy Woodruff is easily one the least bit affected coming so far in her career as an active journalist. Specifically speaking, according to the Celebrity Net worth, she’s gathered a whopping net worth collection of $8 million as of 2020.

The American television news anchor, writer, and journalist dedicated herself to the media and communication industry for nearly five decades. Her bank balance is truly the result of her immense hard work in the media industry working for stations like PBS, CNN, NBC News, and many more.

You may also like: All About ESPN Journalist Chris McKendry

Did you know that Woodruff also serves as a board member at the International Women’s Media Foundation? She’s also a proud member of the Council on Foreign Relations as a result of her expertise and knowledge. Currently, the lady enjoys her income and spends it on a lavish lifestyle that she deserves. However, even at the age of 73, there’s no stopping her from her work as she’s still just as dedicated as she was before.

Normally journalist’s are extremely vocal when it comes to their professional life but the same cant be said to their personal life. Same goes for Judy Woodruff as well. However, we did find all the right details on the journalist as to her personal relations and married life. She is happily married to the love of her life, Al Hunt, a fellow columnist and a former reporter.

The long lasting couple met during a softball game especially for the journalists and staff of the Carter presidential campaign in Plains, Georgia back in 1976. After four years of pursuing each other, the pair tied the knot on April 5, 1980, surrounded by their loved ones and family in St. Alban’s Episcopal Church in Washington, D.C.

Also See: Find Out All The Details on Comedian Mike Armstrong

Together the journalist couple share three lovely children, Jeffrey born on 1981, Benjamin born on 1986, and Lauren born on 1989. The story of the birth of Judy’s first son was quite adventurous as she gave birth to him just five hours after appearing on air. Their third child Lauren was adopted from Korea when she was just four months old.

That’s all for now, follow Featured Biography for more reads on your favorite celebrities!