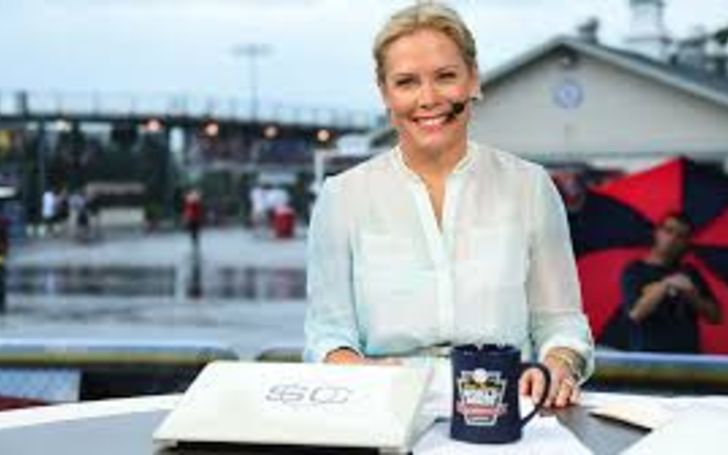 You might know Chris McKendry as the famous long time journalist from the sports channel, ESPN. At the moment she can be seen as a full time-on-spot host of ESPN tennis coverage of the French Open, Australian Open, and the US Open. The lady is one of the most successful anchors of ESPN all because of her extraordinary talent as a media person and journalist. If you’ve watched her on TV then you might be interested to know about her life from net worth to career to her relationships.

When it comes to finances, Chris McKendry has quite about nothing to worry for herself. Being in the media industry for so long, she’s succeeded not only professionally but also financially. She’s made a stable place for herself for more than 20 years working for sports TV giants like ABC, ESPN, covering events all over the world.

As for some deeper knowledge on her wealth, the journalist earns a handsome amount of annual salary of $85,000 as a sports journalist. In addition to that, she is also the holder of a massive net worth collection of $2.3 million as of 2020.

You may also like: Suzanne Malveaux Colossal Net Worth Collection Throughout The Years

No wonder she’s one of the most successful sports journalists out there. With such a six-figure bank figure, the journalist enjoys a lavish lifestyle surrounded by all sorts of modern-day amenities.

Chris McKendry’s career shined after she joined the ESPN channel. Prior to that, she worked as a sports reporter at the WJLA-TV, ABC affiliate based in Washington D.C. After that, she first anchored at the SportsCenter and shifted to ESPN News for the launch of the 24-hour sports news network.

While working as a co-host in the show for the weekend morning and weekday shows, she covered events like ESPN’s Wimbledon coverage in 2007, U.S. Open for SportsCenter in 2002-06, Winter X Games late-night host for the X Games in 1997 and 1998, and many more.

Chris McKendry is easily one of the most popular TV anchors out there who is extremely vocal about her professional career and achievements. However, the same cannot be said for her personal life. Only through much speculation, we found out that she is indeed in a happily committed marriage relationship with her husband Eduardo Andrade.

McKendry’s husband is a graduate from Trinity College of Hartford and a master’s degree from Georgetown University. He is currently the president of Westport Library and coach of Westport little league. The couple tied the knot in September 1998 at the Most Holy Trinity Church in Pomfret, Connecticut. After years of their marriage, the lovely couple shares two equally adorable sons.