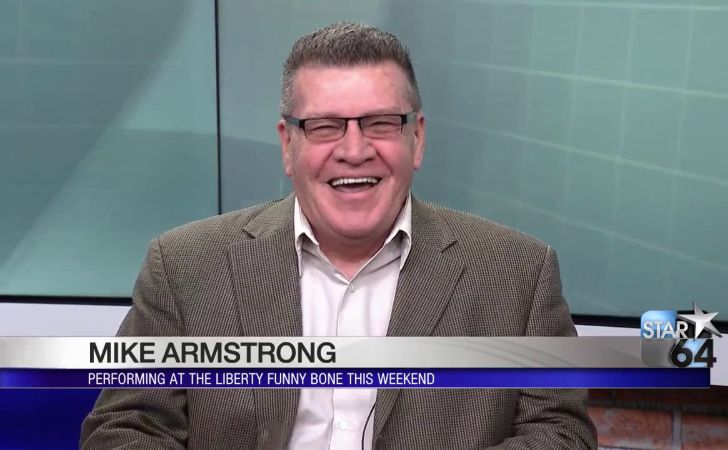 The famous saying of Peter Ustinov holds quite true for ‘Life is a tragedy to those who feel and a comedy to those who think.’ Mike Armstrong is someone who tries his best to spread laughter all over the work with his career as a comedian. You would be quite surprised to know that the comedy expert didn’t focus on stand-up until the age of 48. However, his fans remain grateful for whatever reasons that he made a switch of the profession. Besides, his sense of humor was always there to compliment him into the profession to earn a living. So, today we take you close to the personal life, net worth, and career details of Mike Armstrong.

When it comes to finances and income, Mike Armstrong has nothing to worry about considering his well-accomplished career in acting. Specifically, he gathers a staggering net worth of $500,000 as of July 2020. In fact, the primary source of his massive bank balance is his dedication to conducting live shows on bars and stages, for which his fans pay a hefty price to see him live.

Armstrong’s massive net worth helps him to enjoy a lavishing lifestyle around all sorts of modern-day amenities. Although the COVID-19 outbreak hit his plans for the year to a significant extent, his fans can’t wait for things to cool down so that they could see their favorite comedian yet again on the screens. Interestingly, he made an enormous fortune from television appearances in renowned shows like HBO, Comedy Central, the Fox, and CMT networks.

People are surprised to know that Mike Armstrong wasn’t a comedian since his youth. Interestingly, he worked as a cop to enforce law and safety in the society, until the age of 48, when he shocked many to start a career in stand-up comedy. He was always gifted with humor, and the veteran’s decision to reveal them to the public was one of the best decisions he made.

Armstrong opened up on his switch to comedy in his late forties and explained how he understood that the profession is preferred among the young people. Despite that, he looked upto some comedians who achieved great success no matter their old age, such as Rodney Dangerfield and Redd Foxx. Kudos to his background job, his quick-wit earned him the tag of ‘everyone’s favorite former cop’ in the world of stand-up comedy.

While Mike Armstrong might be extremely vocal about his career as a comedian with a whole website named after him, he prefers to keep a low-profile of his love life. He is a married man to his longtime wife Petra. Unfortunately, he didn’t reveal when the two tied the knot or how they started dating in the first place.

Armstrong and his beloved wife Petra share five adorable children, exactly like their father’s clones. They include Rufus, Millie, Georgia, and Humphrey. Whenever not on the stage, he loves spending time with his wife and kids to give them the best possible childhood. Getting into his history, he grew up in the conservative mid-west in a small town near Louisville, Kentucky.