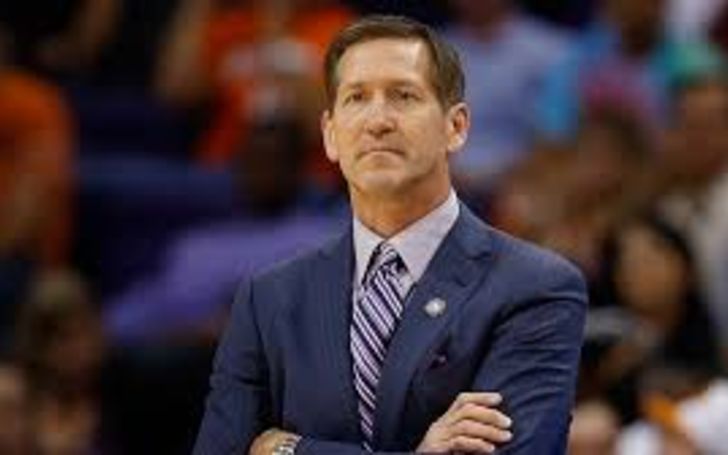 Jeff Hornacek is a former American basketball player and basketball coach who played in the National Basketball Association (NBA) teams like Phoenix Suns, Philadelphia 76ers, and Utah Jazz. As a coach, he was the coach of Phoneix suns and New York Knicks. A happily married man what more do people really know about him, let’s find out in the section below!

Who is Jeff Hornacek’s Married With? Does He Have Any Children?

Jeff Hornacek is married to his wife, Stacy Nelson, of many years. He met his spouse when both of them were studying at Iowa State.

The former athlete fell for Stacy and asked her out, but she turned him down. But he did not give up, and the very next day, he tried his luck and asked her about going out for the night. Finally, his sweetheart accepted, which began an incredible journey love story.

Also Read: Does English-Canadian Actor Keir Gilchrist Have a Girlfriend?

After dating for many years, the couple eventually tied the knot on June 07, 1986. The pair has been enjoying a blissful married life ever since, and there has never been any rumors of any major disputes in their relationship.

All of Hornacek’s children are grown up. His oldest son Ryan works for Google in Chicago, Tyler is an account executive for a division of Fox Sports in Los Angeles. His daughter Abby is a television sports reporter for 120 Sports in Chicago.

The former Phoneix Suns coach has a good bond with his kids and often gets together for family reunion parties and other events.

Jeff Hornacek boasts a net worth of $8 million, as of 2020. His wealth is thanks to a successful career as a basketball player and coach. As a coach, he earned $2 million paychecks per season for his service.

As for his assets, the 1.91 meters tall man owned a beautiful house in Paradise Valley, Arizona. However, he sold the luxurious five bedrooms and six bathrooms home for $2.995 million in May 2018.

The 57-year-old began his basketball career for Phoneix Suns in 1986, where he stayed for six years. In 1992, he joined Philadelphia 76ers and stayed there for two seasons. He played the final four years of his career in Utah Jazz.

As for his coaching carer, he worked as an assistant coach for Utah Jazz from 2011 to 2013. After that, Hornacek became the head coach of Phonix Suns from 2013 to 2016. In June 2016, New York Knicks announced him as their new head coach, but after less than two years, he was fired from his job.

The father of three played Iowa State Cyclones and helped win the 1986 NCAA tournament. In 1986, he was drafted by the Phoneix Suns as the 46th overall pick. In his NBA career, he was NBA All-Star in 1992, won two times NBA Three-Point Contest winning in 1998 and 2000. In his career, he always wore 14 number jersey and was retired by his former clubs Iowa State Cyclones and Utah Jazz.