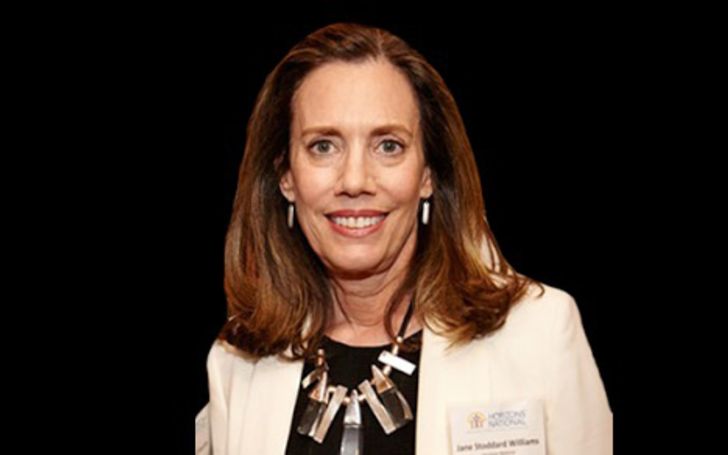 Jane Stoddard Williams is a former freelance television producer and executive producer who worked at Washinton-based Fox-owned news channel WTTG-TV. Besides that, she is also known by many as the wife of veteran American journalist Brian William. At present, she is working as the host and producer of Bloomberg EDU. Get more information about her in the section below!

How is Jane Stoddard Williams’s Married With Her Partner? Do They Have Any Children?

As you already know, Jane Stoddard Williams is in a marital relationship with her husband, Brian Douglas Williams. Like spouse is an American journalist at NBC News, who currently serves as the chief anchor for popular news channel MSNBC.

The lady and her sweetheart first met in 1982. At that time, both of them were working at WTTG-TV. Mrs. Williams was an executive producer while her partner was a news correspondent.

After getting to know each other well, they dated for a few years. On June 07, 1986, the pair walked down the aisle in the presence of their family and close ones. The wedding took place at the First Presbyterian Church of New Cannan, Connecticut.

The bride’s close friend Martha Gantsoudes served as the matron of honor while the groom’s friend Richard Sims served as the best man at their ceremony. Since then, the two have been living as husband and wife.

Despite being married for an incredible thirty-four years now, Jane Stoddard Williams and Brian Williams live a happy married life. From their relationship, they have two children, daughter Allison Williams who was born on April 13, 1988, and son Douglas William.

Both of their kids are grown up, their daughter Allison is a renowned American actress known for her HBO series Girls. The duo’s son Douglas is an anchor at SportsNet New York and hosts the show Geico SportsNite. The show occasionally airs the same time as his dad’s MSNBC show.

Jane and The 11th Hour with Brian Williams host lives a happy life at their home in New Cannan, Connecticut.

Jane Stoddard Williams has a net worth of $2 million from her career as a television producer. As a former executive producer of Panorman on WTTG-TV, she should have made a handsome salary.

As for her husband, Brian William, who is one of the well-known journalists in the US. He boasts a whopping net worth of $40 million. Moreover, as a chief anchor of MSNBC, the George Washing University graduate earns a massive payroll of $13 million a year.

In addition to possessing colossal fortune, the couple is also the owner of a luxurious house in New Cannan. They bought the spacious 3,448 square feet residence equipped with four bedrooms, four bathrooms, and a swimming pool. There is little doubt whether or not the pair lives a lavish lifestyle.

Jane Stoddard Williams was born in New Canaan, Connecticut, United States. Her father was vice president of marketing for WNET/Channel 13 in New York. At the same time, her mother, Patricia Stoddard, was director of administration in the executive office of the Champion International Corporation in Stamford, Connecticut.

The female executive producer did her schooling from New Canaan Country Shcool. She is a graduate of Duke University with a degree in Political Science and Russian Language.