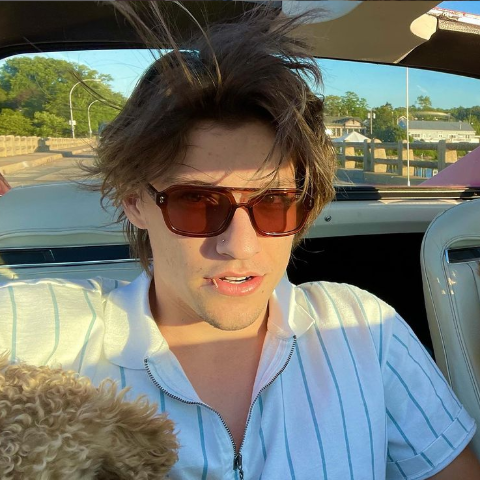 On May 7, 2002, Jake Bongiovi (Real name: Jacob Hurley Bongiovi) was born in the United States of America. Jon Bon Jovi and Dorothea Hurley are his parents. He is the grandson of John Francis Bongiovi Senior, a former marine and barber, and Carol Sharkey, a former Playboy bunny and florist. Hurley is of Caucasian ethnicity and retains an American nationality. He attended the Pennington School in New Jersey and graduated with honors.

The Instagram Star is his parents’ second child. Jesse Bongiovi, born February 19, 1995; Romeo Jon Bongiovi, born March 29, 2004; Stephanie Rose Bongiovi, born May 31, 1993, are his three siblings. Matthew Bongiovi and Anthony Bongiovi, Jacob’s uncles, are brothers. He keeps in close contact with his four siblings and has been seen with them.

As of 2021, Jacob Hurley is just 19 years old. Hence the celebrity child’s net worth is meaningless because he has no source of income. On the other hand, his father, Jon Bon Jovi, makes a lot of money from his job, and his net worth is estimated to be in the $410 million range. He owns a duplex condo in New York City that he is currently selling for $39.9 million. His house in New Jersey cost $22,000,000. As the son of a famous star, he lives a lavish lifestyle made possible by his father’s wealth.

The star is earning the respect of all his followers by living up to his name. He has amassed tens of thousands of fans despite never appearing in a film or television series. Jacob’s video of him signing a sheet of paper went viral, causing fans to point out that he is signing with his left hand.

Jon Bon Jovi’s young son is a sports and adventurous individual who has many fond recollections of his many trips. Jacob’s also uploaded all of the footage from his vacation on his official Instagram account, and he seems to enjoy every second of it because he’s always smiling.

Jacob Hurley Bongiovi is currently said to be in a relationship with Millie Bobby Brown. The exact length of their relationship is uncertain. However, rumors of a romance initially surfaced in April. Fans noted that they frequently commented on each other’s social media posts, which sparked speculation about their connection. Then, when they were seen holding hands in New York, they added fuel to the fire and appeared to confirm that they are dating.

Millie and Jake made their romance public on June 19, just a few weeks after the son of rock icon Jon Bon Jovi published a selfie of them together, sparking dating rumors. Jake dubbed MBB his “BFF” in a selfie he posted on June 3, and she responded with a unicorn emoji in the comments.