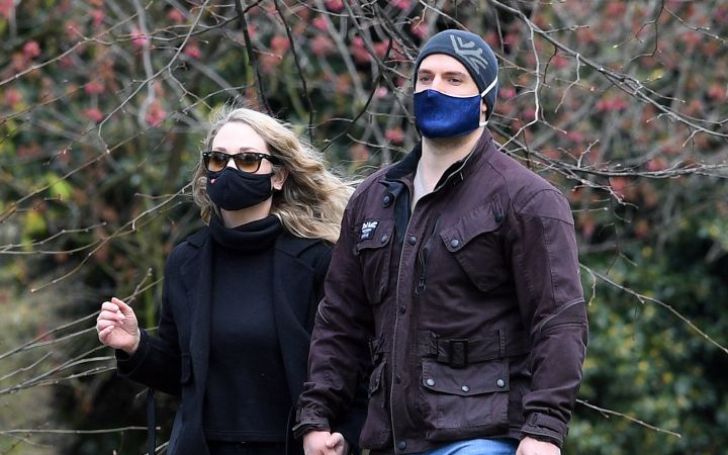 Henry Cavill’s girlfriend came out as Canadian environmental scientist Danielle Beausoleil after the new couple stepped out together during a dog walk.

The pair appeared in the throes of love as they holded hands and gazed at one another happily during a romantic dog walk through the park. The lovebirds wore facemasks throughout the walk with his dog Kal in London this week.

Cavill dressed up for the cool weather and a hat and jacket, including a face mask in keeping with Covid safety. As the actor is an avid social media user, he might let his relationship Instagram official very soon.

Henry has already dated several female celebrities. The heartthrob separated from stunt double Lucy Cork in 2018 after a year of a whirlwind romance.

The actor was previously dating Big Bang Theory’s Kaley Cuoco in 2013. However, the couple only dated for few weeks.

Speaking of how Danielle’s relationship with Cavill changed things, she addressed, “I had no one following me until I met Superman.”

“I’ve been in this business for 20 years and my whole life, I would go anywhere, do anything. There had not been a single paparazzi photo of me until like seven months back. The recognition has been crazy”,

The Witcher star once engaged in professional show jumping rider Ellen Whitaker. However, they broke in 2011, shortly after the proposal.

The actor’s striking looks and chiseled and muscular physique earned him the major role in films like Superman reboot Man of Steel, Batman v Superman: Dawn of Justice, and Justice League 2010s.

The star revealed his staggering weight loss from a “chubby kid” to Hollywood hunk was influenced by a James Bond casting director. During an interview with Men’s Health magazine, Henry said he was motivated to lose the pounds right after Martin Campbell called him a little chubby.

The Justice League cast said he is grateful for his honesty as he had no idea how to train or diet before hearing the comment. I’m glad Martin said something because I respond well to the truth. It helps me get better.