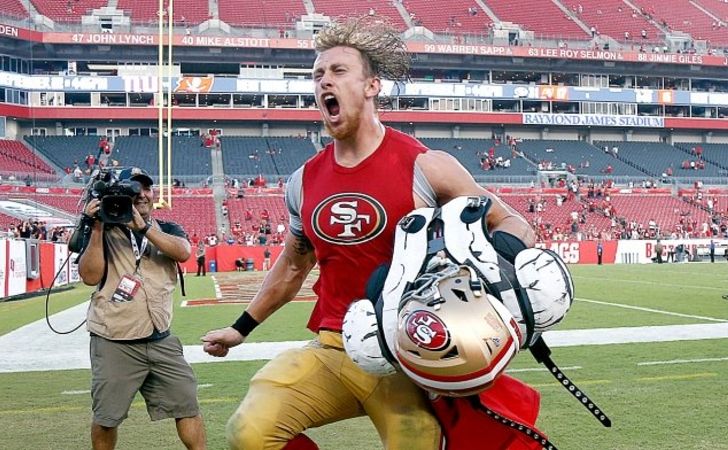 Born on October 9, 1993, George Krieger Kittle is a famous NFL player. He hails from Madison, Wisconsin. Recently, he agreed to sign a record-breaking contract with the 49ers, which made him headlines of many news. Thus, many people want to learn about him. Due to that, today we bring you brief details linked with his professional and personal life.

Net Worth of George Kittle: Income and Salary

The 26-years-old NFL star George Kittle will accumulate a gigantic net worth of $50 million by the end of 2020. He will accomplish to collect that massive fortune, mostly from his recent deal with the 49ers.

George and the 49ers agreed to a five-year extension contract. As sources claim, the contract is valued $75 million, and George will be paid $30 million after he signs the deal and further, he will also enjoy signing bonus of $18 million.

Besides being a record-breaking contract, George’s deal with 49ers also makes him the highest-paid tight end by annual salary. After the agreement is legally passed down, George will be earning an impressive salary of $15 million yearly for the next five years.

Before George Kittle began to play professionally, he honed his skills as a committed player of the University of Iowa. His dad, Bruce Kittle, used to play at Iowa, and he even stayed active as a coach.

George trained under head coach Kirk Ferentz at Iowa from 2012 to 2016. After playing some magnificent games during his University years, he began his professional athlete career. He got selected by the San Francisco 49ers in the fifth round of the 2017 NFL Draft.

Though George’s gameplay was outstanding, he stayed inactive in a couple of matches due to his injuries. During his rookie season, he couldn’t play against the New York Giants as his leg was wounded. Likewise, in the 2019 season, he suffered a knee injury, and he became unable to attend the next few plays.

George Kittle just began his marital life with his beautiful wife, Claire Till. The lovely pair met during their freshman year in college, as per The Net Line. Yes, their relationship began as University students, which quickly turned into a romantic relationship.

In 2018, George shared the engagement rings with his long-time girlfriend, Claire. He proposed her by setting a fake team photoshoot. Subsequently, they tied the knot on April 10, 2019.