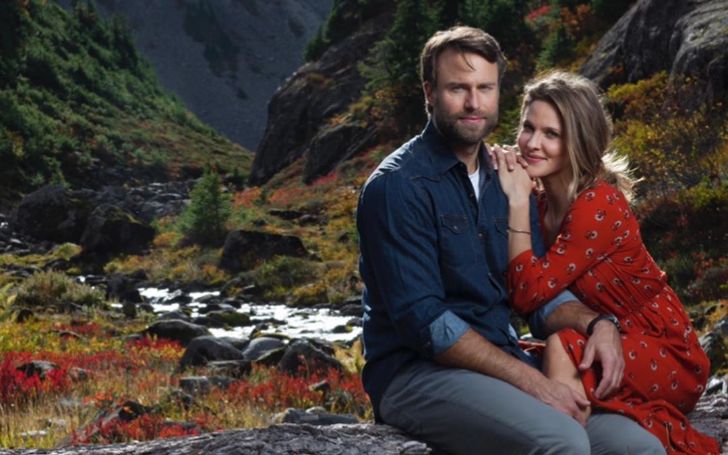 Jill Wagner is unquestionably one of the Hallmark’s greatest acquisitions. She gave us some great movies like ‘Hell’s Kitchen,’ ‘Mystery 101’, and ‘Autumn Dreams.’ While her professional life is nothing short of success, she has a private personal life with her husband, David Lemanowicz. The celebrity husband rose to prominence following their marriage, but that doesn’t mean he is any less of a man.

The love story of David Lemanowicz and actress Jill Wagner is exciting considering their multi-cultural background. Wagner’s beau was born on March 8, 1976, in Vancouver, British Columbia, Canada. He spent his whole childhood there while his wife is from the United States. However, that doesn’t tell the entire story as David’s parents were from Poland. His parents grew up in an oppressive society before settling in 1973.

Being an immigrant child, David Lemanowicz didn’t enjoy the most pleasant childhood. With his crooked history, Wagner’s husband always felt fortunate living in First World country. Since everyone knows how hockey is famous in Canada, he came across the sport since high-school.

David played hockey since his teenage days. His career embarked with Kelowna Spartans in 1991/92 season in the British Columbia Hockey League, where he started playing as a goaltender. Later, he joined teams like Penticton Panthers and Spokane Chiefs to strengthen his resume further. With four seasons in Chiefs, he still believes that it was his best days in his playing career

Lemanowicz was the draft number 216 in the NHL Entry Draft in 1995, as Florida Panthers picked him. Just a year later, he signed with Carolina Monarchs, where he uplifted his level to become a professional. He spent two years with the team before Harford Whalers bought the team. Interestingly, he moved to New Haven for the 1997/98 season.

Amidst all that, David also played hockey for Port Huron Border Cats in the CoHL and Tallahassee Tiger Sharks in the ECHL. Surprisingly, he made a big decision to retire from the sport, more like a break for five years after the 1998/99 season.

Call it destiny or coincidence, the love life of David Lemanowicz and actress Jill Wagner was full of drama. The two first met when David, 20, was playing with Carolina Monarch. While they crossed paths for the first time, they did feel a special vibe. And, the Hallmark actress went on a few dates with her future husband. However, the love story stopped then as both remained occupied to make their respective careers.

You May Like: Biography of Isan Elba – Net Worth and Married Life.

Following his temporary retirement, Lemanowicz went to the University of Toronto to study international relations. He even played ice hockey for the team, before being a coach. It was there where he met his first wife, Gina. They dated for five years before getting married in 2005. The couple even became parents to a daughter, Lija, in February 2010.

Through his connection with then-wife, David applied for American Citizenship. Consequently, they moved to the States, and he joined the American army. After relocating, he did return to playing with the Chicago Hounds and Rio Grande Valley Killer Bees, before retiring permanently in 2010.

The army life of Lemanowicz took him to several places like Afghanistan, which made it difficult to spend time with his family. Between all that, he also met Jill after a long time. Thus, it was then when he decided to part ways with an ex-wife with a divorce agreement.

Destiny played its part as Lemanowicz, and ‘Wipeout’ actress Jill Wagner met again in April 2016. Since he was living alone following the divorce, it panned out well for them as they started dating. Ultimately, the romance intensified as they got engaged in July 2016.

This time, nothing else could break their special connection as Wagner tied the knot with Lemanowicz, a year later in April 2017. Since Jill was a reputed star, the wedding made it to the headlines of all the papers. Following the marriage, the two planned a family together.

Amidst all the COVID-19 pandemic crisis in 2020, Lemanowicz and wife Jill shared a moment of their lives as they welcomed a baby girl on April 20, 2020. They announced how a new member was coming into their little family in November 2019. They named her daughter, Army Gray Lemanowicz, giving a patriotic sense as they conceived her on July 4.

Being a husband of television stars like Jill Wagner gives nothing to worry for David Lemanowicz regarding the finances. As a long-time army and former ice-hockey professional player, he amasses a staggering net worth of $500,000.

On the other hand, Lemanowicz’s wife, Jill Wagner, is a multi-millionaire. She amassed a significant fortune with over fifteen years of experience and countless credits on movies and TV shows. Thus, she gathers a colossal amount of $4 million as of 2020. Thanks to such massive value, the model lives a lavish life with her husband and daughter.