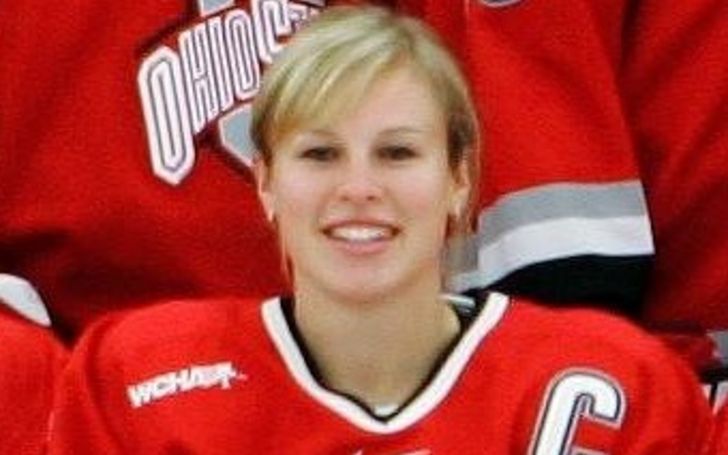 The beautiful Tessa Bonhomme is a former Canadian female ice hockey player who played the recreation sports for the Canadian national team and the Canadian top league CWHL. Currently, the lady is working as a reporter and anchor for the Canadian sports channel, TSN.

Tessa Bonhomme is married to her boyfriend turned husband, Eddie Fiore. Her partner Eddie is a Toronto based entrepreneur, athlete, and musician.

The Olympic Gold medalist has not revealed how she first met or when she began dating her lover. They are the details to themselves for now.

In February 2019, the former athlete posted a couple of pictures as she announced that she is now engaged after saying “Yes” to her sweetheart’s proposal.

Six months later, the love birds got hitched in the presence of their close ones on August 02, 2019. A total of 350 people attended the grand event conducted spectacularly in Mexico.

Tessa posted the pictures of her special day on her Instagram, captioning the post with the best vacation of her life. Furthermore, she also expressed her excitement for the beginning of her new journey.

Almost a year into their marriage, the newlyweds do not share any children yet. They do have, however, a pet English Bulldog, Tank, who gives them company.

Tessa Bonhomme’s Net Worth And Career

Tessa Bonhomme has a net worth of $2 million from her professional career as an ice hockey player and a journalist. At present, she is working for one of Canada’s top news channels; she is sure to make good money from her contributions.

During her college, she played for the Ohio State Buckeyes. Tessa was Canda’s National Women’s Hockey Team in 2004. In 2010, she helped Canada win the Olympic Gold media in her debut Olympics.

The 34-year-old played was drafted in the Canadian Women’s Hockey League in 2010. During her five years of stay in the league, she played for Toronto Furies and won the Clarkson Cup.

On August 05, 2011, Tessa competed in the figure skating competion of the CBC television program Battle of the Blades. she became the first female ice hockey player to participate in the show partnering with Olympic gold medalist David Pelletier. The duo went on to win the 2011 competition.

Check out the clip of Tessa Bonhomme reporting for Toronto Maple Leafs!

In September 2014, Bonhomme joined TSN’s SportsCentre as its host and reporter. Besides reporting, she has a few acting credits appearing in the movie Goon: Last of the Enforcers (2017) and in an episode of American T.V. series Man Seeking Woman.

Tessa Bonhomme was born on July 23, 1985, in Sudbury, Ontario, Canada. She is the daughter of Doug Bonhomme and Debbie Bonhomme. Similarly, she has an older sister Britta Bonhomme.

The 1.70 meters tall lady is a graduate of The Ohio State University. In her young days, she played for the Sudbury Lady Wolves and served as the team’s captain in 2003.