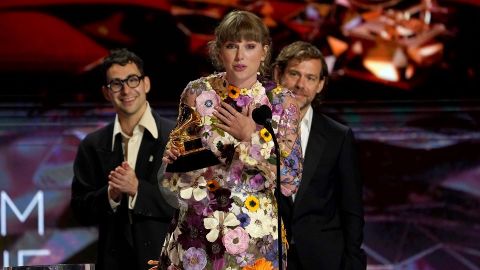 Album of the Year Grammy Winner Taylor Swift made sure to include her friends Blake Lively and Ryan Renolds in her Grammy’s winning speech.

Taylor Swift broke all the records with both her music and not to miss the back-to-back awards that she’s bagged in her name. The singer took home her third Album of the Year win this year in the 2021 Grammy Award night.

The 31-year-old singer received the accolade for her 2020 album Folklore which marks her as the first female artist to win the category three times. In her winning speech, she made sure to thanks all of her well-wishers including friends, Ryan Renolds and Blake Lively.

The Cardigan singer initiated her speech addressing all of her collaborations with artists, including Jack Antonoff and The National’s Aaron Dessner, who also joined her on the stage while she thanked them. She also called out for Justin Vernon and then moved ahead to mention her boyfriend Joe Alwyn as, “I want to thank Joe, who is the first person that I play every single song that I write, and I had the best time writing songs with you in quarantine.”

At last, Taylor said, “I want to thank James, Inez, and Betty and their parents, who are the second and third people that I play every new song that I write,” while adding, “You guys met us in this imaginary world that we created, and we can’t tell you how honored we are, forever, by this. Thank you so much, and thank you to the Recording Academy. We will never forget that you did this for us. Thank you so much.”

You may also like: All To Know About Charlotte Elizabeth, a British Handbag Company

Back in the time of the launch of the album, the Deadpool actor and his wife had yet to make an announcement about the name of their third child, but Swift confirmed about the speculation as ” I named all the characters in this story after my friends’ kids.”