Lorrie Higgins is the long-time girlfriend of former Boston mayor Marty Walsh. Yes, she is. Her beau resigned from his current position to take on the secretary of labor role in the Joe Biden administration. Because of Higgins's lover's tremendous rise in the political arena, many grew curious to learn about her; thus, here we go. 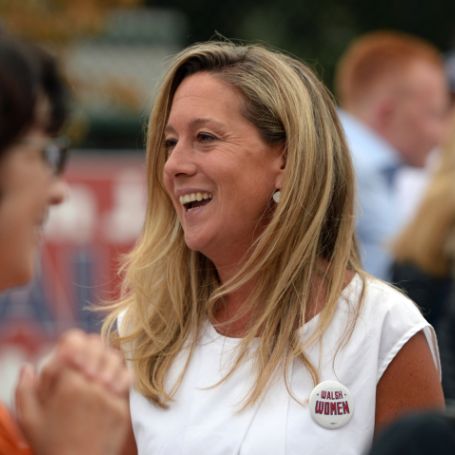 Because Lorrie Higgins earned massive attention through her romantic relationship with Marty Walsh, let us first learn about her love life with her lover. The lovely duo began to date back in 2005, long before Walsh’s mayoral run; however, they haven’t tied the knot yet.

Although Higgins and Walsh’s love story started in 2005, they occasionally crossed paths, as both grew up not so far from each other in Dorchester, as Earn The Necklace noted. However, they only reconnected after both of them started working at the State House.

While working in the same place Higgins and her lover man got to know each other better, and they gradually began their romantic relationship. Talking about who took the first step, sources claim, it was Walsh. He was mesmerized by Higgins’s beauty and asked her out several times before she agreed to date him.

Lorrie Higgins is a proud mother of her gorgeous daughter Lauren Campbell. Yes, she got a baby girl, and the interesting fact is that she welcomed her sweet angel when she was only 19-year-old.

Indeed, Higgins gave birth to her baby girl while she was still a teen. Back then, she was a senior at Monsignor Ryan Memorial High School when she found out about her pregnancy. So, who is the father of Higgins’ daughter, Lauren?

Lauren’s dad’s name is Paul J. Campbell, who was seven years Lorrie’s senior. However, he isn’t part of Higgins’ and Lauren’s lives, but Higgins shed the light that his parents had been good to her and her daughter. Thus, she raised her daughter as a single mother.

It is speculated that Higgins hasn’t got married to her boyfriend, Walsh, because of Lauren. Her daughter has always been her first and last priority, and she even rejected him initially so that she can give all of her attention to her baby girl. Nevertheless, Lauren is grown up now, and the duo is together for more than a decade, so that they might walk down the aisle sooner or later.

Lorrie Higgins was born on February 13, 1973. She is a native of Massachusetts. The 48-year-old is one of four children of her parents Richard and Margie Higgins; this means she grew up alongside her three siblings, Michelle, Richard III, and Michael Higgins.

Click To Know: All About The Dog Trainer and Netflix star Jas Leverette

Sadly Higgins’ dad, Richard, passed away at the age of 68 back in 2017. He was a U.S. Army veteran who served during the Vietnam War and served in the Massachusetts National Guard. Furthermore, he worked as an electrician at the Jamaica Plain Veterans Administration Hospital.

According to Stars Offline, Lorrie Higgins amasses an enormous net worth of $750 thousand as of 2021. Yes, she enjoys a six-figure fortune, all thanks to the efforts she placed in her professional life.

Like her beau, she is into politics, but Lorrie used to work as a waitress before entering into politics. In between 2000 and 2014, she served as the administrative aide and the deputy chief of staff to state representative Eugene O’Flaherty.

Following her departure, she joined LB Strategies as a fundraising consultant. Further, she supports Walsh’s endeavors, having worked behind the scenes on his campaign, but generally stays out of the spotlight.