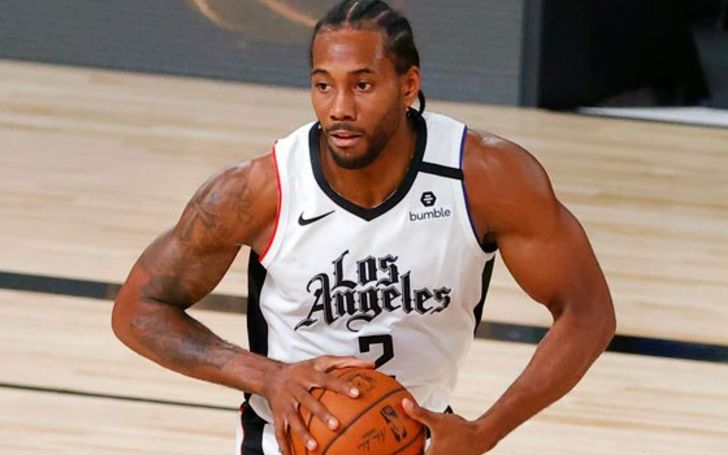 Kawhi Leonard is a renowned National Basketball Association (NBA) star. With his fabulous performance as an American basketball athlete, he earned the nickname the Claw/Klaw. He actually got that name for his ball-hawking skills, which credits go to the grip provided by his big 11-inch hands. As he gained lots of attention, many people wanted to know about him. However, his low-profile life keeps many details away from the mass. Despite the odds, we brought some brief information about him, so stay tuned until the end of this page.

As of 2020, the NBA athlete, Kawhi Leonard, holds an impressive net worth of $30.5 million, according to Forbes. He is in his late twenties, and he already hit the multi-millionaire tagline.

The secret behind Leonard’s outstanding financial status lies behind his successful career history. Thus, to learn more about his fortune, let’s know about his professional journey.

Kawhi Leonard, professional journey as an athlete began after he got picked in the 2011 NBA draft by the Indiana Pacers. However, he was traded to the San Antonio Spurs on the same night. He then signed a multi-year deal with the Spurs on December 10, 2011.

In 2012, Leonard was selected to play in the Rising Star Challenge, an exhibition held by NBA. Unfortunately, he couldn’t make it due to a calf strain.

On October 26, 2012, he was re-signed for a year by the Spurs. He had an exceptional year, and many fell in love with his game. Thus, with successful match records, he was signed again by the Spurs.

Leonard, on July 16, 2015, agreed for a five-year deal with Spurs. He signed a $90 million contract at that time. Subsequently, on July 18, 2018, he joined the Toronto Raptors. He had a great time when he played for the Raptors. Soon, after a year, he was signed by Los Angeles Clippers in 2019. According to sources, Clippers brought him in by giving out a $103 million contract for three-year.

In his almost a decade long gameplay, Leonard was honored several times for his impressive matches. He was named NBA Defensive Player of the Year and NBA Finals MVP a couple of times. Further, he won All-Star four times.

With the rise in fame, many opportunities knocked on the door of the athlete, Kawhi Leonard. Until today, he signed some great endorsement deals with several companies, some of which include New Balance and Air Jordan.

Kawhi Leonard’s showing up less in the media creates tons of confusion regarding his love life in the mass. Many of his fans think he is married to his wife and has a daughter. Well, he has a daughter; however, he hasn’t tied the wedding knot with his lover. Indeed, they are still unmarried.

During one of his few interviews, Leonard even answered with a laugh saying he doesn’t have a social media account to a question from the press. So, he prefers to stay away from the internet world. Due to this, his personal life rarely makes its way to his fans. Thus, that is one major reason why there is confusion in the crowd regarding his marriage.

Speaking more about Leonard’s girlfriend, Kishele Shipley, she is the mother of his baby girl, Kaliyah Leonard. Several reliable sites say that they first met at San Diego State University. Yes, they know each other since their university days. Slowly they dated, and in 2016, the lovely couple gave birth to their cute angel.