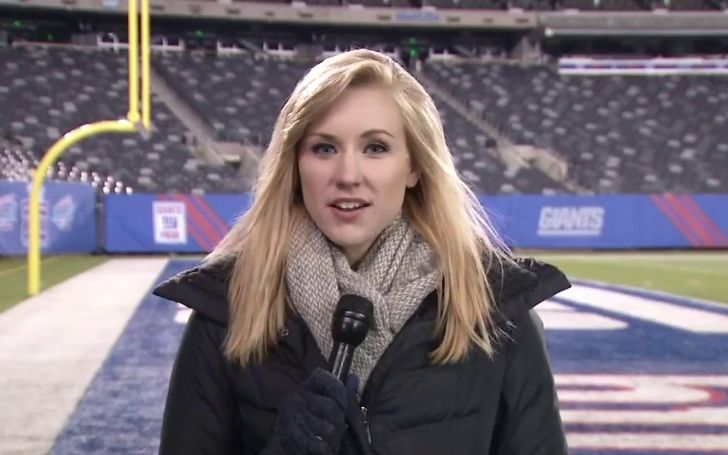 The lovely Hannah Trippett is an American journalist who is working as a sports reporter at San Antonio’s News 4 and FOX 29 News. Previously, she worked at a news channel like WOAI-TV and WDHN. Read more about the talented Hannah’s professional life and also into her private life in this article.

What is Hannah Trippett’s Relationship Status? Is She Taken?

It might be surprising to learn this, but the beautiful Hannah Trippett is possibly not dating anyone and is likely single at the moment. There has never been any relationship rumors about her love life in the media till now.

The Tribune Media reporter, moreover, has never hinted anyone as her lover on social media. Maybe she is focusing on her career and leave the romance for later.

The charming journalist is fond of babies and often posts pictures with her niece and nephew on her Instagram. She might love to have one of her own someday, but who knows when that will be?

Usually occupied with her hectic work schedule, Trippett likes to relish her spare time with her family and close ones. She gives insights into her private life by posting pictures and videos on her social media.

In her flourishing media career so far, she has worked for many news companies. She worked as a sports reporter at San Antonio’s News 4 and FOX 29 News. While in San Antonio, she covered all seven games of the 2017 World Series. Moreover, she also covered the Cowboys and the Spurs.

Check out the clip of Hannah Trippett doing her job as a reporter and anchor!

Hannah also served as a traffic anchor at the local TV station’s program Morning Dose. At present, she joined Houston’s CW39, where she joined in December 2018.

Hannah Trippett was born in Houston, Texas, while she grew up in Sugar Land. As for her schooling, she attended Fort Bend Baptist Academy. After that, she went on to receive a Bachelor’s Degree in Journalism and Multimedia Journalism at The University of Texas at Austin.

The lady did her inter at KEYE-TV in Austin, Texas for four months and later at Time Warner Cable News and Sports Talk 790, and ESPN. After her graduation, she went on to work for Sports Director and anchor for WDHN.

Trippett also has a volunteering experience of almost three years. She worked in Reading in Fundamental (RIF).

If you want to read similar celebrity articles, make sure you visit the website Featured Biography!