Danielle Bregoli is an American rapper, internet sensation, and television personality who rose to prominence in September 2016 after appearing on an episode of 'Dr. Phil.' Bregoli, a native of Florida, gained media and public attention as a result of her appearance on 'Dr. Phil.' Her behavior on the show inspired the viral video meme and catchphrase "cash me outside, how 'bout dah?" 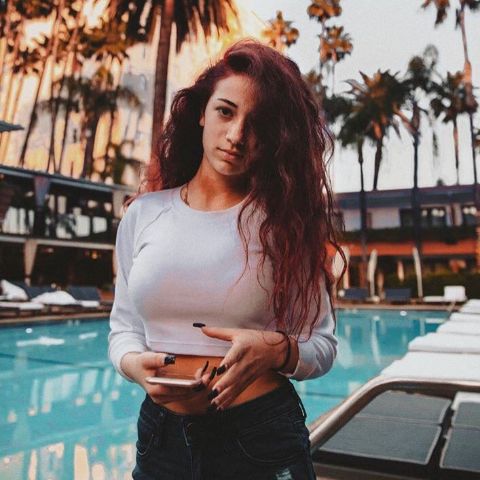 Danielle Bregoli, AKA Bhad Bhabie, is a $6 million net worth American social media star and rapper. She became a viral sensation in 2016 when she appeared on “Dr. Phil” and used her now-famous catchphrase, “Cash me outside how bow dah,” which became one of the year’s most popular memes.

The 18-years-old joined the subscription platform OnlyFans in April 2021. She soon shared a screenshot of her earnings report, which allegedly showed she made $1 million in just six hours on the racy platform. The earnings report listed $757,000 in subscription fees (she charges $24 per month), $267,000 in DM payments, and $5,500 in tips. She owns a home in Calabasas, California.

Danielle Bregoli has always been a troubled girl, and by the time she appeared on ‘Dr. Phil,’ her mother had almost given up on her. Barbara and Danielle appeared on Dr. Phil McGraw‘s show on September 14, 2016, in a segment titled “I Want To Give Up My Car-Stealing, Knife-Waving, Twerking 13-Year-Old Daughter Who Tried To Frame Me For A Crime.”

Bhabie’s first appearance on ‘Dr. Phil,’ her catchy song was released as a single. It charted on the Billboard Hot 100, Streaming Songs, and Hot R&B/Hip-Hop Songs after being recorded by DJ Suede The Remix God. In early 2017, she agreed to a deal with product placement manager Adam Kluger, who was searching for ways to promote his career in the music industry.

On August 26, 2017, Bhad released her debut single, ‘These Heaux.‘Bregoli became the chart’s youngest female rap star when her song peaked at number 77 on the US Billboard Hot 100. The song’s success drew the attention of some of the industry’s biggest record labels. Atlantic Records eventually signed her to a multi-album recording contract.

On September 22, 2017, the 18-year-old released her second single, ‘Hi Bich.’ The song, produced by Ronny J, peaked at number 68 on the US Billboard Hot 100 and number 29 on the US Hot R&B/Hip-Hop Songs chart (Billboard). It also received the Recording Industry Association of America’s gold certification (RIAA).

The singer also released three non-album singles in 2017: ‘Whachu Know,’ ‘I Got It,’ and ‘Mama Don’t Worry (Still Ain’t Dirty).’ She began the year with the release of yet another non-album single, ‘Both of Em.’ Her song, ‘Gucci Flip Flops,’ was released on March 26, 2018, and is her first collaboration with rapper Lil Yachty. On June 14, 2018, she released the single ‘Trust Me,’ which featured Ty Dolla Sign. Her first mixtape, ’15,’ was released on September 18, the same year.

Danielle Bregoli has admitted to dating both men and women. For a certain time, she shared a home with an ex-girlfriend. Bhad sparked dating rumors after getting NBA YoungBoy‘s name tattooed on her hand in 2019. She was also rumored to have dated Billie Eilish, but Eilish has responded to the rumors on social media, posting a photo of herself with the caption, “I’m not dating Danielle y’all stupid, that’s my baby sister.”

At the age of 17, she first posted a photo of her boyfriend. Fans later discovered that Oca8oo, who goes by the name Oca8oo on Instagram, appears to be in the music industry and sharing projects by his rapper and friend, Lil Candy Paint.

Danielle Bregoli was born in Boynton Beach, Florida, on March 26, 2003, to Ira Peskowitz and Barbara Ann Bregoli. Ira and Barbara had been together for a year when Barbara became pregnant. They were married at the time of Danielle’s birth but divorced when she was a baby. Her mother has raised her on her own since then. Bregoli and her father never really developed a relationship. Ira is a police officer who works as a deputy for the Palm Beach Police Department.

Disney Channel star Skai Jackson was threatened by Bregoli in a video shared on her social media in 2020. Skai filed a restraining order against Bregoli, claiming the rapper threatened her life. Jackson says she is terrified of leaving her house alone and hasn’t slept well since Danielle’s attacks. The judge granted the restraining order, and Bregoli is now required to stay at least 100 yards away from Jackson, her home, and her workplace.