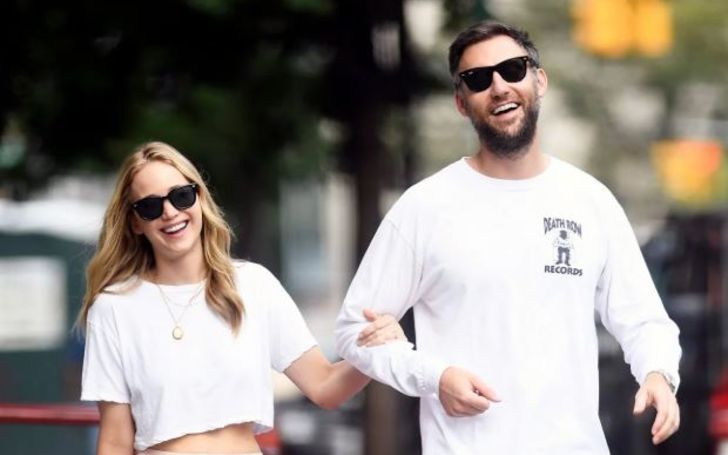 When you are affiliated with a celebrity, there is a high risk that you become one as well. ‘The Hunger Games’ actress Jennifer Lawrence recently made the headlines as she married longtime boyfriend in Cooke Maroney. While everyone is aware of Lawrence’s stature in the entertainment industry, it was quite a surprise when she got into a romantic relationship with an absolute stranger for the showbiz industry. So, who actually is Cooke Maroney? Let’s check his personal life and net worth.

Who Is Cooke Maroney?

The lucky man who got to be the husband of Jennifer Lawrence is not from the entertainment industry. Surprisingly, Cooke Maroney is a 34-year-old art dealer. Not just that, he is also the director of the Gladstone Gallery in New York, which represents top artists like Richard Prince, Carroll Dunham, and Matthew Barney.

Maroney is an active servant in the art industry since his teenage days. Interestingly, he was always interested in studying art form his college days. Getting into details, he went to High School in Middlebury, Vermont, for his education. Before that, he studied Art History at New York University.

Maroney previously worked at the Gagosian gallery before pushing the ranks at Gladstone to become a director.

When the media revealed the news of Jennifer Lawrence’s new date as Cooke Maroney, the whole showbiz industry was surprised. In fact, it was Jennifer’s best friend, Laura Simpson, who introduced them to each other and later announced their affair in May 2018. Initially, they used to keep the details regarding their affair quite intimate and upto themselves only.

Maroney and Lawrence’s first-ever public appearance was during a dinner date in June 2018. As time passed by, the relationship between them further strengthened as they got engaged on February 2019. The art director proposed the ‘Red Sparrow’actress with a gorgeous ring to spend the rest of their lives together.

Also See: Get all details about ‘Naked and Afraid’ survivor Laura Zerra’s net worth.

After seven months of preparation, Cooke Maroney and Jennifer Lawrence finally tied the knot on October 19, 2019. All the expectations were met since they enjoyed a lavishing wedding ceremony in Newport, Rhode Island. In fact, they did the nuptials at the Belcourt mansion in front of close friends and family.

While Maroney wore a classy black tuxedo, her Hollywood star actress was in a gorgeous Dior dress. Following the ceremony, they enjoyed a glitzy party with a performance from The Ruckus.

Jennifer Lawrence recently found her soulmate and made him her husband in 2019. Yes, Cooke Maroney is the lucky man who stole the heart of millions. As a longtime servant in Gladstone Art Gallery, he owns a staggering net worth of around $500,000 as of 2020. Well, there is no point of worrying about the finances as his beau is a multi-millionaire.

While Maroney makes a reasonable sum of money, comparing his worth with his megastar wife would be quite unfair. In fact, his wife Jennifer Lawrence amasses a colossal fortune $130 million as of 2020. The 29-year-old’s income is bound to rise as she continues working at the top level. Some of her best works to date are ‘Hunger Games film series,’ X-Men: First Class’, and ‘Dark Phoenix.’