Who is Coldplay Guitarist Jonny Buckland’s Wife? Find Out Here 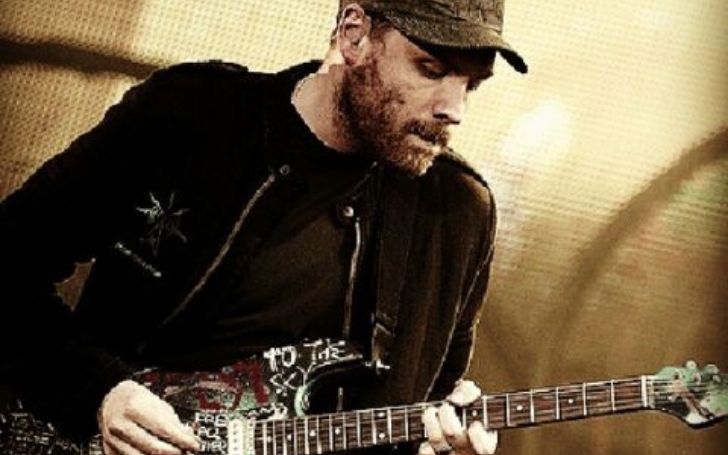 Jonathan Mark Buckland is a Welsh musician, composer, and the lead guitarist of Coldplay, an alternative rock band he co-founded with Chris Martin. In 1996, he met Chris during their orientation week. For the rest of the year, the two established a band, eventually settling on Pectoralz. Classmate Guy Berryman eventually joined them, and they called themselves Starfish in 1997, doing tiny club performances for local Camden promoters.

Furthermore, Martin enlisted the help of his long-time friend Phil Harvey, a classics student at the University of Oxford, as their manager. Will Champion, who was in charge of percussion, completed the line-up. They then changed their name to Coldplay and began practicing in Buckland’s bedroom in an apartment with neighbors who could handle the noise. Then many people became fans of Jonny. Now, Let’s know about his relationship.

Jonny Buckland’s Married Life. Who is His Wife?

Jonny Buckland is a happily married man. He tied a knot with his beautiful wife, Chloe Lee-Evans. The couple had been dating for years. There are no details on how and when they got met for the first time. Talking about Chole, she is a jewelry designer. Further no data about her personal information.

The pair married in 2009 at a neo-classical church with high ceilings, chandeliers, and flowers lining the chamber on London’s posh One Marylebone Road. Chris Martin, Will Champion, and Guy Berryman, all members of the band, were in attendance. Daniel Pearce, an X-Factor competitor, performed tunes with his band during the reception.

The love birds firstly welcomed thier daughter in May 2007. The name of the daughter is Violet. Moreover, Jonah, their son, was born in November of 2011. Buckland is one of Chris Martin’s daughter Apple‘s godfathers. In addition, his family lives mostly in the Belsize Park neighborhood of London, although they also own two flats in New York City. Tim Buckland and The Domino State, Buckland’s brother, opened for Coldplay at the O2 in December 2008.

Buckland was born in Islington, London, on September 11, 1977. He is 44-year-old as of 2021 and holds British nationality. When Jonny was four years old, his family relocated to Pantymwyn, near Mold, Flintshire, Wales. He joined the Scouts when he was eleven years old.

The 44-year-old attended Ysgol y Waun and Alun School, the latter of which was in the Welsh town of Mold. Buckland also took A-Level Music, Maths, and Science there before going to UCL in London to pursue his studies. He started having holiday work at the Daily Post newspaper in North Wales in 2019.