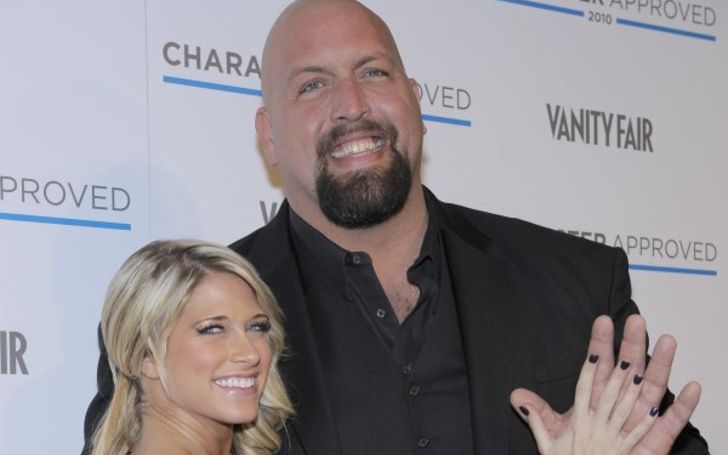 If you are a wrestling fanatic, then you must be aware of World’s Strongest Athlete, Big Show. The former World Champion recently released a new Netflix show, ‘The Big Show Show’ which demonstrated his life outside wrestling, especially towards his family. Since then, the internet community gave an extra-attention towards his beloved wife, Bess Katramados. While the diva might have risen to fame through celebrity marriage, she was quite an established model herself in the past. So, without wasting much time, let us delve into her net worth, career, and married life.

Former model Bess Katramados wasn’t the first wife of the former WWE Champion Big Show, but she certainly hopes to be the last one. The wrestler, initially used to be married with Melissa Ann Piavis, before they parted ways on February 6, 2002. Surprisingly, Bess and the wrestler used to date in the final days of his first marriage.

Bess Katramados and Big Show preferred to take things quickly as they tied the knot on February 11, 2002, only after five days of the wrestler’s divorce. Ever since the two have been blissfully together and couldn’t be happier. Even though there were rumors on how they broke up in 2013, they were soon cleared up as nothing was concrete.

Bess is known as being a strong support system for Big Show in his wrestling career. In fact, she decided to quit her modeling career to become her husband’s trainer. She often attends her lover’s wrestling matches and supports him throughout all the injuries and hardships.

As Bess Katramados tied the knot with WWE Superstar Big Show, she made significant sacrifices by quitting her modeling career. Instead, she chose to become a homemaker and her husband’s trainer. Likewise, her decision proved pivotal as they embarked their family life together since Show was mostly on the road with WWE.

Shortly after their marriage, Bess became a mother of two adorable children. Not just that, she also serves as a step-mom to Cierra Wight, Big Show’s daughter from first-wife Melissa. It is quite inspiring how Katramados takes equal care of her as they won the child’s partial custody.

The happy family of five live together at their mansion-like house in Miami, Florida.

While Bess Katramados might be famous for being the support-system of Big Show, she made some name for herself from her modeling career as well. Initially, she pursued modeling from her hometown, Illinois. Things took a big turn after her marriage, as she quit the sector to become a personal trainer for her spouse.

Being the wife of such a wrestling sensation means that she need not worry about the family’s finances. However, her personal net worth details aren’t disclosed yet as the diva prefers living a lowkey life. However, her husband, Paul Wight, aka Big Show, is a multi-millionaire with a staggering net worth of $20 million as of 2020.