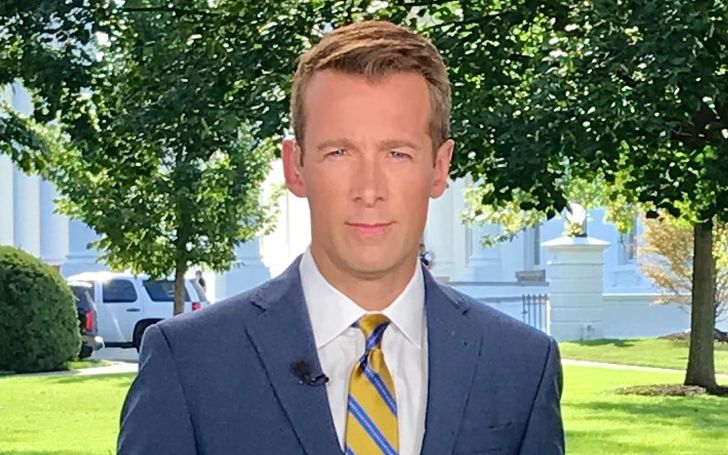 Ben Tracy is an American journalist who serves as the White House correspondent for the CBS Evening News and CBS This Morning. In the past, he has the experience of working on WCCO-TV, WISN-TV, and WBAY-TV. He has covered many national and international breaking news in his career. But apart from his professional life, there is so much of what people are curious to know about Ben, so, let’s take into his life and also about his net worth in this article!

Is Ben Tracy in a Relationship With Anyone? What About His Personal Life?

Ben Tracy is openly gay and has a romantic relationship with his boyfriend, Mark Gustafson, for many years. The two began dating on June 16, 2013.

The former WISN-TV reporter is open on his love life and posts pictures with his lover on his social media accounts, most notably on Instagram. They have been dating for seven years already and share a great bond with each other. They must have thought on getting hitched soon, but who knows when that will be?

Most of the time, he remains busy with his works, but in his free time, he prefers spending time relaxing with close ones and friends. He is currently residing in Washington, D.C.

Ben Tracy’s Net Worth And Career

In the many years of his career in journalism, he’s worked on a few news companies. In the early days of his career, he worked as a reporter at WISN-TV Milwaukee and WBAY-TV in Green Bay, Wisconsin.

After that, he worked as a reporter for WCCO-TV in Minneapolis, where he was a member of the channel’s investigative team. During his time there, he covered major news and stories like the methamphetamine epidemic and the collapse of the 35W bridge. Moreover, he was a contributor to the Saturday Early Show and introduced his signature segment titled Good Question.

Check out the clisp of Ben Tracy reporting at North Korea’s Testing Site in 2018!

In January 2008, he joined CBS News national correspondent. Right now, he is the CBS White House correspondent for the CBS Evening News with Norah O’ Donnell and CBS This Morning.

Ben Tracy was born as Benjamin Sampair Tracy on July 16, 1976, in St. Paul, Minnesota. For his schooling, he went to St. Thomas Academy in Minnesota.

Later, he studied at Marquette University, where he graduated with a bachelor’s degree in Broadcast Journalism and Political Science. Moreover, from the same university, he also obtained a Master’s degree in Public Service.

As a journalist for many years, the 44-year-old has reported and covered news and stories from over 16 countries on five continents. He has been to North Korea three times and was the country’s only western broadcast television correspondent to report from the country’s main nuclear testing site. Likewise, he also covered national and international stories, which include the two historic meetings between President Donald Trump and North Korean leader Kim Jong Un in Hanoi and Singapore, the rescue of 12 boys, and their soccer coach from a cave in Thailand.

You May Also Like: CBS News Journalist Susan Zirisky’s Relationship Status And Net Worth!

In addition, he also covered major international sports news during the 2018 Winter Olympics in Japan and the 2016 Summer Olympics in Rio de Janeiro, Brazil.

For his contribution in the field, he has received six Emmy Awards and two Alfred I. DuPont-Columbia Awards honoring excellence in broadcast news.

If you wish to read more similar celebrity articles, be sure to check out the website Featured Biography!